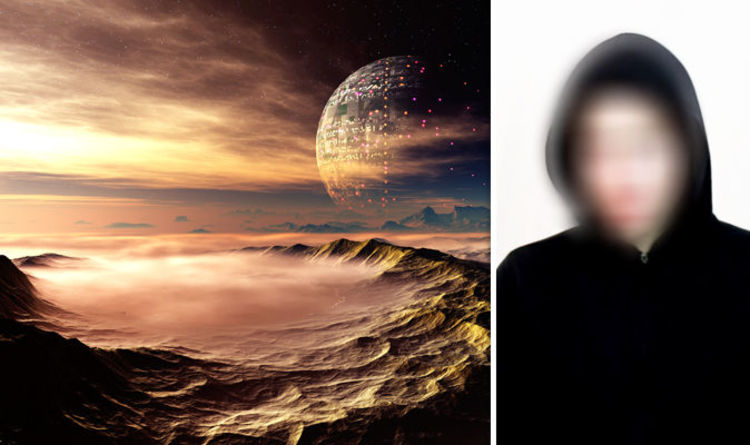 
James Oliver issued the world with the shocking revelation in a video that detailed his life on another “planetary system”.

He explained: “Hello my name is James Oliver and I’m from a planetary system that is not this one, I’m sorry I’m being very vague I cannot be specific, it’s company procedure. I work for an organisation, I cannot disclose the name of this organisation, it’s against policy, but essentially what I am is I’m sort of like an archaeologist.

“What actually happened to my craft is on January 31 of this year when the super blue blood moon happened, it interrupted a transmission I was receiving from headquarters, it was a simple software update for my ship.

“But what had happened was the geological event had disrupted the signal somehow and I got backchannels flooding into my system from outside sources and it essentially fried the operating system of my ship, which means that I am stuck here until another research team lands on this planet.

“Where I am from is an interesting story because my planet and Earth, of course, are do not have the same orbit pattern around the respective suns. So you have 365 days in a year, mine is a bit different, it just has to do with the fact that my planet is further away from my sun than yours is. It is not a big deal but it does make it hard to try to figure out which year I am actually in.

“Thankfully there are some equations and calculations that can help me with that. I have completed these and the year that I’m from in relation to your version of measuring time, I’d be from the year 6491.”

Mr Oliver went on to describe his role as a “field analyst” that involves him travelling through time to observe different periods.

He went on: “I go back through time and I’m looking through clues from the past and I’m a field analyst, I study different time periods, I study different cultures and I have happened to end up in this one. It’s a bit of a tragic story actually.”

“I have been at several major events throughout your history, I specialise in the solar system, there are several other agents working here as well.

The “time traveller” explained that time travel on his planet involves the use of “particle accelerators” that have been vastly miniaturised thanks to advancements in technology.

He continued: “So essentially the way the whole time travel thing works, at least where I’m from is essentially particle accelerators, it’s this big circle of very reinforced pipe and they take singular atoms and they accelerate them to near light speed and smash them together, at extremely high velocity and this uses a lot of energy.

“What we have managed to do is create a particle accelerator that is a lot smaller, a lot more portable and also our particle go faster than the speed of light.

“What this means is that when they collide, we generate nuclear fission which is the driving force behind stars. It is the only process that can create more energy than you start out with.”

The “archaeologist” expressed his disappointment for being stuck on Earth with no indication as to how long it will be before he is flung forward in time by another member of his “organisation”.

He stated: “The fact that I’m stuck here is a bit of a bummer really and all of my scanning equipment is run from my ship and obviously I don’t have use of it at this moment.

“So really I can’t even be working and that is why I joined up with this in the first place. I’m curious as to what has happened throughout other worlds throughout space and time and I can’t even do what I wished I would do.”

Why Do We Wake Up at 3am And Dwell on Our Fears? A Psychologist Explains
Jet Fuel Made From This Crop Could Cut Emissions by Up to 68%, New Analysis Proves
This 12,000-Year-Old Fossil Jaw Could Be The Oldest Known Dog in The Americas
This Is The Devastating Global Effect a Nuclear War Would Have on Earth’s Air
Elusive ‘Electron Crystal’ Phenomenon Directly Imaged For First Time Ever