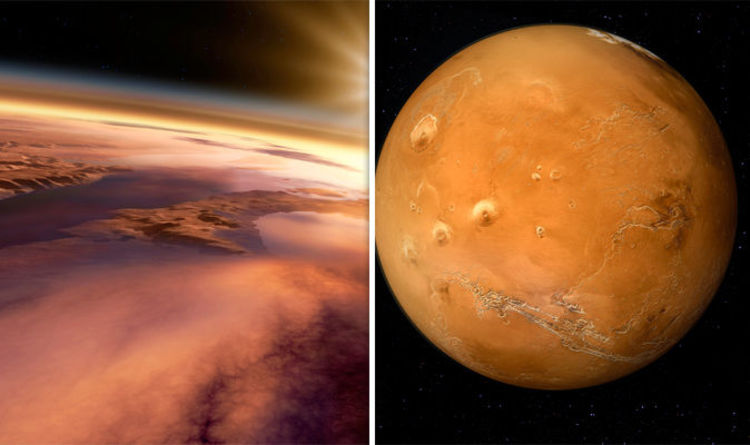 
Scientists used the Mars Reconnaissance Orbiter (MRO) to discover eight sites beneath the Martian surface where there are thick deposits of ice.

Experts believe the ice deposits which fell as snow “long ago”, have been preserved by up to two metres of ice-cemented rock and dust.

The scientists behind the discovery believe the findings could make future Mars missions easier, and will help reveal the history of Mars’ climate.

The study’s lead author, Colin Dundas of the US Geological Survey’s Astrogeology Science Center in Flagstaff, Arizona, said: “There is shallow ground ice under roughly a third of the Martian surface, which records the recent history of Mars.

“What we’ve seen here are cross-sections through the ice that give us a 3-D view with more detail than ever before.”

MRO Deputy Project Scientist Leslie Tamppari of NASA’s Jet Propulsion Laboratory said: “If you had a mission at one of these sites, sampling the layers going down the scarp, you could get a detailed climate history of Mars.

“It’s part of the whole story of what happens to water on Mars over time: Where does it go? When does ice accumulate? When does it recede?”

Shane Byrne of the University of Arizona Lunar and Planetary Laboratory, Tucson, a co-author, said: “The discovery gives us surprising windows where we can see right into these thick underground sheets of ice.

“It’s like having one of those ant farms where you can see through the glass on the side to learn about what’s usually hidden beneath the ground.

“Astronauts could essentially just go there with a bucket and a shovel and get all the water they need.”

NASA has previously said it aims to get the first humans to Mars somewhere between 2030 and 2040.

Elon Musk’s SpaceX has the financial clout to reach Earth’s next door neighbour and is aiming to get people to the Red Planet by around 2030, with the first people there being tasked with beginning to build a new civilisation.

These Asteroid Particles May Be Our Most ‘Pristine’ Sample of The Outer Solar System : ScienceAlert
Jupiter’s Ice Moon Europa Probably Has Upside Down, Underwater Snow : ScienceAlert
Scientists Gave Young Mice The Blood of Old Mice. Then Things Got Weird : ScienceAlert
Many Cat Lovers Are Giving Their Cats Unwanted Affection, Study Suggests : ScienceAlert
Why Do Kids Get Worms, And What Can You Do to Prevent It? : ScienceAlert