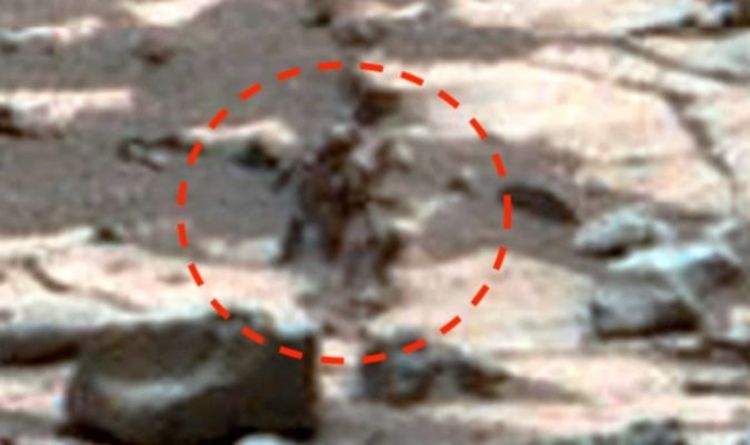 
The suspected aliens were spotted in images of the Red Planet taken by the Curiosity rover droid which is exploring Mars for the US space agency before beaming back high-definition images.

They were seen by Scott C Waring, editor of website Ufosightingsdaily.com, who regularly scours through the pictures looking for signs of life.

Mr Waring claims they were next to some sort of building with a collapsed wall.

He blogged: “Are you having trouble believing in aliens today? Well then, have a look at these photos from the Mars surface.

“The photo above and below show two figures standing next to each other.

“It’s impossible to tell if they are alive or statues, but I would say they are statues that have survived millions of years.

“One figure is short, fat and half as tall as the one next to it.

“The other figure has bended knees, as if sitting down, and looks to have its legs spread and its back to the other one.

“I also found a large detailed statue of a pig-like creature, and something that looks like a bowl shaped house with its roof ajar.

“There were also lots of rectangle or square entrances at the bottom of rocks, I only included two, but I saw many.”

Over the years Mr Waring claims to have found an array of signs of life in the pictures, including other aliens, buildings, creatures and fossils.

There is a popular conspiracy theory that an advanced civilisation once thrived on Mars, but it was killed off by an inter galactic nuclear war.

NASA does not agree and says it has found no evidence in any rover images of signs of even the most simplistic forms of life.

It has found traces of water on Mars and earlier this month pictures emerged that could have contained fossils of very simple forms of life, but so far, it is inconclusive.

This is a phenomenon when the brain tricks the eyes into seeing familiar objects or shapes in textures or patterns such as clouds or rock formations.

Deepwater Horizon Oil Spill Still Detectable 10 Years Later, Scientists Say
New Predictions Reveal The Fate of The World’s Biggest Ice Sheet if We Don’t Act : ScienceAlert
Plants Have Been Keeping a Secret From Us About How Thirsty They Actually Are : ScienceAlert
Extreme Drought in Italy Reveals Hidden Bomb Submerged in River Since WWII
This Artificial Synapse Can Run a Million Times Faster Than Ones in The Human Brain : ScienceAlert