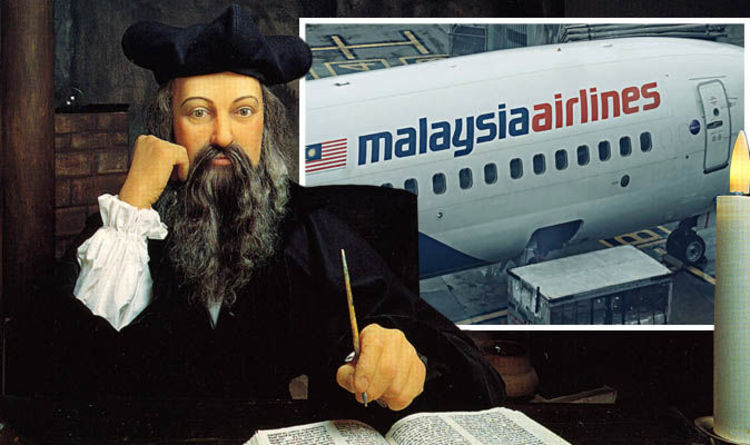 
The key to discovering MH370, which vanished in 2014, could be hidden in a cryptic passage penned by Nostradamus in 1556.

The French apothecary and mystic may have foretold the tragedy in his magnum opus, Les Propheties (The Prophecies), it has been sensationally claimed.

Nostradamus, who many believe foretold the rise of Adolf Hitler and the Great Fire of London, wrote in mysterious four-lined verses known as quatrains.

One of these quatrains may concern Malaysia Airlines Flight MH370, which went missing on March 8, 2014, while carrying 227 passengers and 12 crew to Beijing, China

The missing MH370 flight remains one of the biggest unsolved aviation mysteries, despite some wreckage of the plane found in 2017.

Sumyth Dubey, a blogger from India, believes Nostradamus predicted the tragedy more than 460 years ago.

According to Mr Dubey, Nostradamus’ Century Three, Quatrain Five holds the answers to MH370 in “in plain sight”.

The passage, originally written in Latin, reads: “Near, far the failure of the two great luminaries

“Which will occur between April and March.

“Oh, what a loss! but two great good-natured ones

“By land and sea will relieve all parts.”

Mr Dubey wrote in 2014: “The search for MH370 is still on. Nostradamus might have prophesied about its location, too.

“Hope takes us to places which might seem absurd. As they say, hope is a dangerous word.

“But hope is the only thing which the families of MH370 victims might have.”

According to the blogger, there are a number of clues in the quatrain pointing towards a connection with the Malaysia Airlines mystery.

The “two great luminaries” mentioned in the text could be pilots Zaharie Ahmad Shah and Fariq Abdul Ahmad, who between them had tens of thousands of hours of flight time.

Next, the text mentions the failure “will occur between April and March”. MH370 last communicated with aircraft control 38 minutes into its flight on March 8.

Mr Dubey then said the “great loss” mentioned by Nostradamus means the 239 people onboard the plane, currently presumed dead.

The “relieve” by land and sea supposedly refers to the vast rescue operations undertaken by 27 countries in the aftermath of the tragedy.

The blogger added he does not typically believe in predictions but “deprecate times call for desperate measures”.

A Malaysian Ministry of Transport report in July 2018 could not determine a conclusive cause of the disappearance.

Here’s How You Can Watch SpaceX’s Historic First Launch of NASA Astronauts Live
Official Footage Shows US Navy Ship Use a Laser Weapon to Destroy a Flying Drone
The Dinosaur-Killer Asteroid May Have Hit Earth at ‘Deadliest Possible’ Angle
Bumblebees Bite Plants to Make Them Bloom, Scientists Find
Earth’s Most Mysterious Mass Extinction May Have Had an Ozone Depletion Component