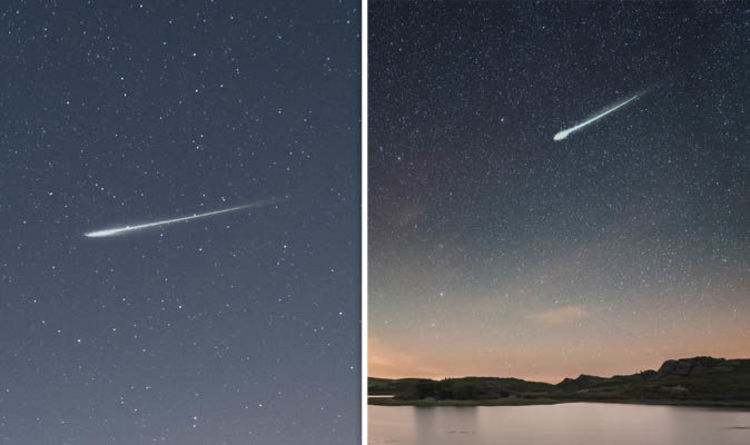 
The Draconids will remain active at night in limited numbers between today, October 10, and October 16.

The meteor shower peaked on the night of Tuesday, October 8, producing between five and 10 fireballs an hour.

The Draconids are not the most dazzling of annual showers but will nicely transition into the next yearly shower – the Orionids shower.

Once the Orionids peak later this month, astronomers believe you will be able to witness up to 20 meteors zipping across the sky every hour.

When is the Orionid meteor shower?

The annual shower kicks off around the start of October and runs through until the first week of November.

During this month-long period, the shower slowly builds in intensity as it heads towards its peak.

This year, the shower is expected to be most intense on the nights of October 21 and October 22.

On this night the Earth will move through the source of the Orionid meteors – the orbital path of Halley’s Comet.

How to best see the Orionid meteor shower?

The meteors might be hard to spot in the washed out skies this month, because of the Full Moon which peaks on October 24.

Dr Edward Bloomer, an astronomer at the Royal Observatory Greenwich, told Express.co.uk the meteors will feature low on the horizon, further hindering your efforts.

The shooting stars will appear to radiate from a point in the Constellation Orion, which is where they derive their name from.

For the best odds of spotting the Orionids you should find a cozy, dark spot far from any sources of light and with unobstructed views of the horizon.

Dr Bloomer said: “Get as far away from any light source as you reasonably can.

“The light pollution of urban areas makes it difficult to spot anything in the sky and you want your eyes to be as sensitive as possible.”

If you plan to watch the meteor shower outdoors, you should give your eyes between 20 and 30 minutes to adjust to the dark.

You can read more of Dr Bloomer’s tips for spotting the Orionid meteor shower by clicking here.

What are the Orionid meteors?

The Orionid meteors are bits and pieces of cosmic rubble broken off from Halley’s Comet.

Every year between October 2 and November 7, the Earth’s orbit crosses paths with Halley’s orbit, slamming into this debris.

The Orionids burst into the Earth’s atmosphere at breakneck speeds of around 150,000 mph (66.9 km per second).

Halley’s Comet is also responsible for another annual meteor shower – the Eta Aquariids in May.