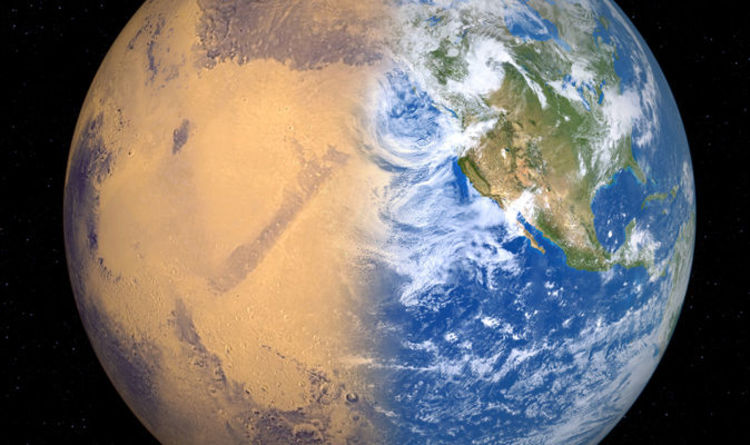 
Scientists had hoped they would be able to change the landscape of Mars by whatever means necessary so it more resembled Earth.

One potential option of terraforming the Red Planet was to release the carbon dioxide trapped within the planet to thicken the atmosphere, keeping the planet warm enough to sustain liquid water, in exactly the same way greenhouse gasses build up on Earth.

One way of doing this was to drop thermonuclear bombs at the planet’s poles – an idea which had gained the backing of many experts including Elon Musk.

This is because, according to NASA: “The most accessible source is CO2 in the polar ice caps; it could be vaporised by spreading dust on it to absorb more solar radiation or by using explosives.

“However, vaporising the ice caps would only contribute enough CO2 to double the Martian pressure to 1.2 percent of Earth’s.”

The new research has found that by using the current technology we have available today, it would not be possible to completely change the CO2 levels of the planet.

Mars’ current atmospheric pressure is just 0.6 percent that of Earth’s, and as it is farther away from the Sun than we are it would take a lot to bring it up to our levels and keep it at a relatively warm planet which could support life and water.

Bruce Jakosky of the University of Colorado, Boulder, lead author of the study appearing in Nature Astronomy, said: “Carbon dioxide (CO2) and water vapor (H2O) are the only greenhouse gases that are likely to be present on Mars in sufficient abundance to provide any significant greenhouse warming.

“Our results suggest that there is not enough CO2 remaining on Mars to provide significant greenhouse warming were the gas to be put into the atmosphere; in addition, most of the CO2 gas is not accessible and could not be readily mobilised.

“As a result, terraforming Mars is not possible using present-day technology.”

NASA added in a statement: “The results indicate that terraforming Mars cannot be done with currently available technology.

“Any such efforts have to be very far into the future.”