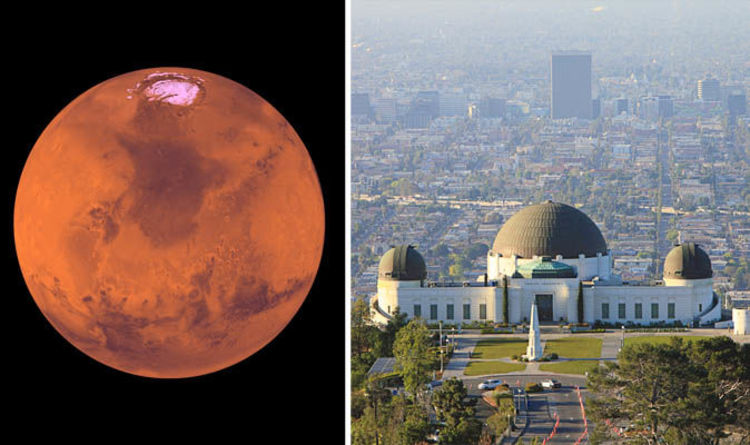 
Mars’ approach to Earth was broadcast over the internet this morning from the LA-based Griffith Observatory.

The world-renowned astronomical facility live streamed the Red Planet for more than four hours as it appeared in the skies over California.

The embedded live stream above kicked off at 10pm PT on the night of Monday, July 30, and ended this morning at 2am PT.

On this night, Mars came strikingly close to Earth on its orbit, approaching within 35.8 million miles of our home planet.

The Red Planet last made an approach this close in 2003 when it came within 34.6 million miles of Earth.

The Observatory said: “For four hours, beginning on Monday night, July 30, at 10pm, Griffith Observatory provides a rare opportunity of you to see the planet Mars at its closest.

“On that evening, Earth and Mars will be 35.8 million miles from each other, the closest that they have been since the historic 34.6 million-mile close approach in August, 2003.

“By a celestial coincidence, at the same time, Mars will be at its very best position for viewing through a telescope from Los Angeles, as it crosses the meridian and appears highest in the southern sky.

“The next similar close approach won’t happen until September 11, 2035, when Mars will be 35.4 million miles away.”

The Red Planet peaked in its orbit around 12.45am PT on Monday morning, or before sunrise on the East Coast.

The Griffith live stream was accompanied by the Observatory’s astronomy experts who were on hand to guide the viewers through the event.

If you missed the live stream or the Mars approach, the good news is the Red Planet will remain really bright in the skies for the next few weeks.

Mars will start to dim by around mid-August and return to its normal magnitude of brightness around the start of September.

Starting today, Mars will also appear to shrink in size to observers due to the goring distance between Earth and the Red Planet.

The two stellar bodies will not meet again this close for another 17 years.

But for the time being you can enjoy Mars’ characteristic red glow which should stand out from the stars.

If you have a telescope at home you should get a good view of the planet but Mars will be just as easily visible to the naked eye.

Wolves Really Can Become Attached to Humans Like Dogs Can, Adorable Study Finds : ScienceAlert
We Have Our First Look at Neptune’s Rings in 33 Years, And They’re Glorious : ScienceAlert
Does IQ Decline as We Age? One Type of Intelligence Peaks in Your Twenties : ScienceAlert
REM Sleep May Exist to Heat Your Brain Up From The Inside : ScienceAlert
The Tonga Eruption’s 50 Million Tons of Water Vapor May Warm Earth For Months to Come : ScienceAlert