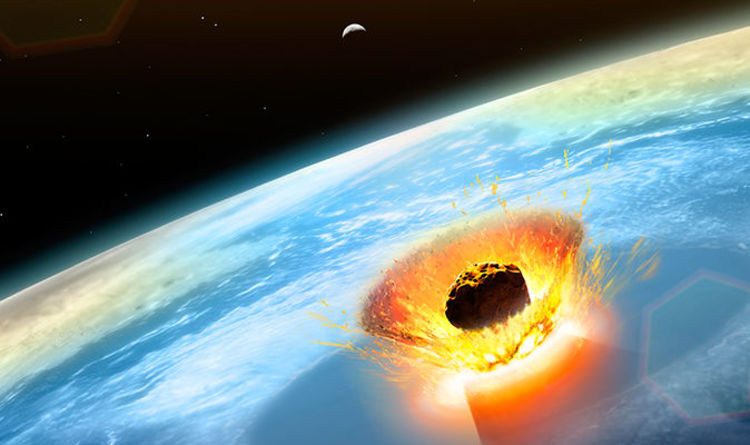 
During an era of “intense bombardment”, the team wrote that the Hedean and Archean eons, from roughly 4billion to 4.6billion years ago and 3.5billion years ago respectively, may still have seen “intervals of clement conditions” that could have housed life.

They stated: “Intense bombardment is considered characteristic of the Hadean and early Archean eons, yet some detrital zircons indicate that near-surface water was present and thus at least intervals of clement conditions may have existed.

“We investigated the habitability of the top few kilometres of the subsurface by updating a prior approach to thermal evolution of the crust due to impact heating, using a revised bombardment history, a more accurate thermal model, and treatment of melt sheets from large projectiles.

“We find that subsurface habitable volume grows nearly continuously throughout the Hadean and early Archean because impact heat is dissipated rapidly compared to the total duration and waning strength of the bombardment.

“Even in the Hadean, melt sheets have little effect on habitability because cooling times are short compared to resurfacing intervals, allowing subsurface biospheres to be locally re-established by groundwater infiltration between major impacts.”

The team came to the conclusion that the Earth’s “subsurface is always habitable somewhere” in an entry set for release later this year in the Earth and Planetary Science Letters journal.

They went on: “Therefore the subsurface is always habitable somewhere, and production of global steam or silicate-vapour atmospheres are the only remaining avenues to early surface sterilisation by bombardment.”

The research also claimed that mesophiles would have been the most likely sources for life at this point in time.

Mesophiles are microbes that thrive in temperatures between 20 and 50 degrees Celsius.

However, geophysicist Robert Grimm claimed that although life was not guaranteed during the hellish conditions on earth at this time, “an average day in the Hadean did not spell doom”.

Instances of life would have surely increased as the frequency of the asteroid attacks diminished.

Geologist Stephen Mojzsis, from the University of Colorado Boulder who did not contribute to the work, was eager to point out previous studies that claimed life billions of years ago was not possible.

He explained: “For a long time people said, with absolutely no data, that there could be no biosphere before 3.9billion years ago.

“There has been an assumption that the Hadean was mostly an uninteresting slag heap until the sky stopped falling and life could take hold.

“After the solar system settled down, the biosphere could have started on Earth 4.4billion years ago.”