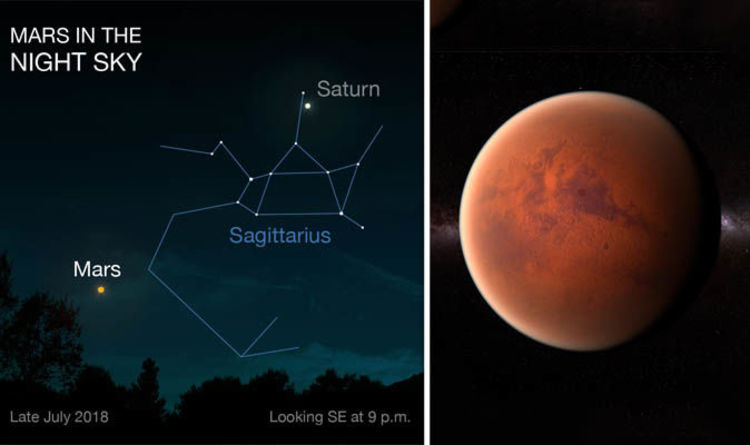 
Mars will be at its closest to Earth than it has been in 15 years and the incredible event will bring bright views of the Red Planet.

According to NASA, Mars makes its approach on the night between July 30 and July 31, peaking in the early hours before sunrise along Eastern Time.

Astronomers at NASA expect Mars to reach its highest point in the sky around midnight, to the left of the constellation Sagittarius at 35 degrees above the southern horizon.

What time will you see Mars today?

In the west of the US, stargazers would have had to look at the skies on the night of July 30 for the best view.

But regardless of whether you spot Mars at its closest point, the Red Planet will feature brightly in the night skies for the next few weeks.

Mars will be visible to the naked eye for most of the night tonight and will begin to fade back to normal around mid-August.

The planet will still remain fairly lit up until early September and we will have to wait until 2035 for it to shine in full glory again.

Mr McClure said: “Mars is out almost all night long now. It look like a bright reddish ‘star’, shining with a steadier light than true stars.

“In late July and August 2018 look for Mars in the east nightfall – highest in the sky near midnight – and in the west as morning dawn starts to light the sky.

“Clouded tonight? Look tomorrow or the next night.”

NASA estimates Mars will make two more close approaches in October 2020 and in 2287.

Over the next few months, Mars will appear to shrink in size as the distance between our planets grows.