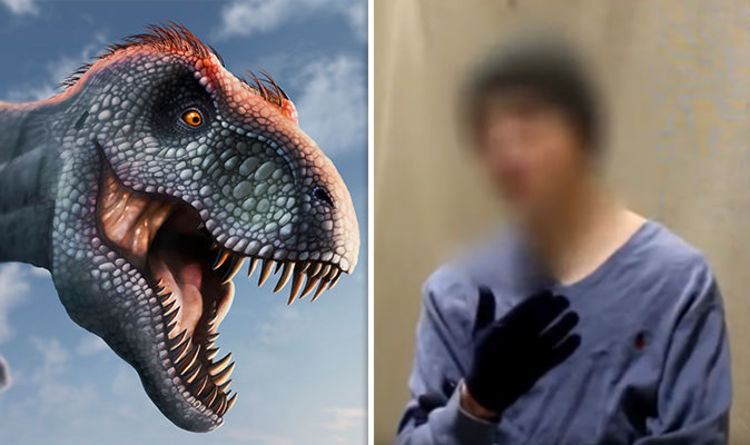 
Appearing on conspiracy Youtube channel Apex TV, a dishevelled man wearing hole-covered clothing claimed he was from 2082 and had been on a mission in which he travelled to the past and saw dinosaurs with his own eyes.

He claimed: “The earliest I’ve gone into the past is about 60million years ago and I actually saw dinosaurs in their natural habitat.

“I saw T-Rexes, Stegosauruses, Triceratops, as well as a lot of other ancient creatures.

“And we actually discovered a lot of ancient creatures that were thought previously not to exist.

“It turns out that giant lizards like the T-Rex, they are actually cold-blooded, however, they’re covered in a lot of feathers.

“The theory that they were just skinned like modern reptiles is incorrect.”

In the bizarre video he goes on to say he has seen “purple T-Rexes” and green ones because they come in a variety of colours.

The alleged traveller also claimed he went to other historical events, such as the Gettysburg address by Abraham Lincoln.

This is because time travellers are sent into the past to document events and take video, he claims.

Time travel is apparently available now, but is hidden by governments around the world.

The traveller is able to move in between time periods by going through “parallel universes”.

But the anonymous man claims the reason he is in our present time is “they”, although it is not explained who “they” are, sent him on a variety of missions to stop major events that could cause a lot of havoc in the world.

The world changes more in between the period of 2018 and 2082 than the rest of human history, according to the self-claimed time traveller.

He apparently knows this because he has travelled to the far future as well as the distant past.

He added: “Events that could make the world a worse place overall. So that’s why I’m here in the year 2018.”

While some people were impressed with the man’s claims, some were a lot less so.

One commenter said: “Wait stegosaurus weren’t around 60million years ago, they died in the Jurassic period.”

Another said: “All these time travel stories contradict each other.”

And a third added: “He should have brought one of the dinosaurs back with him.

“At least a small one so we can bring back the dinosaurs like Jurassic park.”

3 Major Aquatic Animal Groups Can Trace Their Lineage to This Ancient Armored ‘Worm’ : ScienceAlert
‘Dark Data’ Is Leaving a Huge Carbon Footprint, And We Have to Do Something About It : ScienceAlert
Ancient Burial of a Young Girl Shows How We Carried Our Babies 10,000 Years Ago : ScienceAlert
Shimmering ‘Lakes’ Under The South Pole of Mars Might Be Something Else Entirely : ScienceAlert
A Rare Condition Makes Hair Truly Untamable, All Thanks to These Genes : ScienceAlert