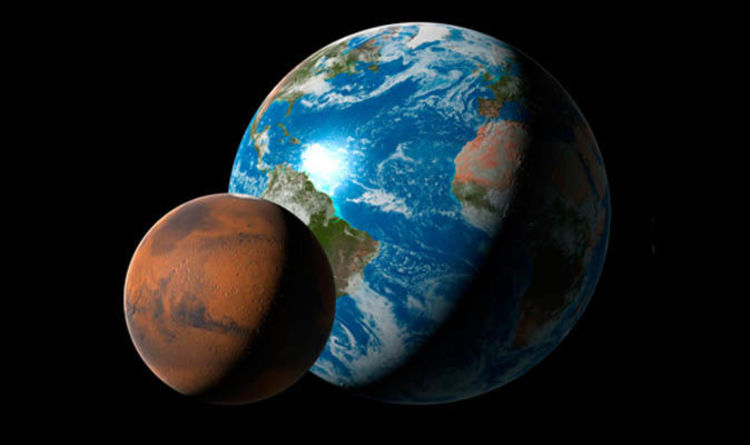 
Mars and Earth currently face each other at a distance of about 35.8 million miles – the closest they have been since 2003.

The approach comes after the July 27 Mars opposition when the Red Planet lined up with the Earth and the Sun in space.

Over the next few weeks, Mars will appear to outshine nearby stars at night, glowing with an intense red glow, until it dims by early September.

With both planets firmly in the spotlight, how exactly do they compare in size?

The planets might appear to be distant cousins, with Mars believed to once be abundant in running water and organic material.

But the planets are very different in many aspects, such as their geology, diameter and orbit.

So is Mars bigger than Earth?

No, the Red Planet is actually is just slightly more than half the size of the Earth.

Mars, the fourth planet from the Sun, is the second smallest planet in our solar system, right behind the icy world of Mercury.

Because the Red Planet completes one rotation around its axis every 24.6 hours, the planet bulges around the equator in a similar fashion to Earth.

But the differences do not stop there.

Almost 70 percent of the surface of Earth is covered in water in contrast to Mars, which is a barren and dusty landscape.

The only liquid seen on Mars appears in ice-form around the north and south poles although scientists suspect liquid water my run beneath the southern icecaps.

There is also a substantial weight difference between the two planets.

When compared to the Earth, the gravitational force of attraction on Mars is only about 38 percent of that on Earth.

In practice, this means a 100kg person on Earth would only weight 38 kg on Mars.

Behold, The Epic Last Images Taken by NASA’s Asteroid Redirection Test Spacecraft : ScienceAlert
Astronomers Think They Know The Reason For Uranus’s Kooky Off-Kilter Axis : ScienceAlert
We May Finally Know Why Oceans in The Southern Hemisphere Are Getting So Warm : ScienceAlert
Shimmering ‘Lakes’ Under The South Pole of Mars Might Be Something Else Entirely : ScienceAlert
Weight Lifting in Old Age Does More Than Just Keep Your Muscles Strong : ScienceAlert