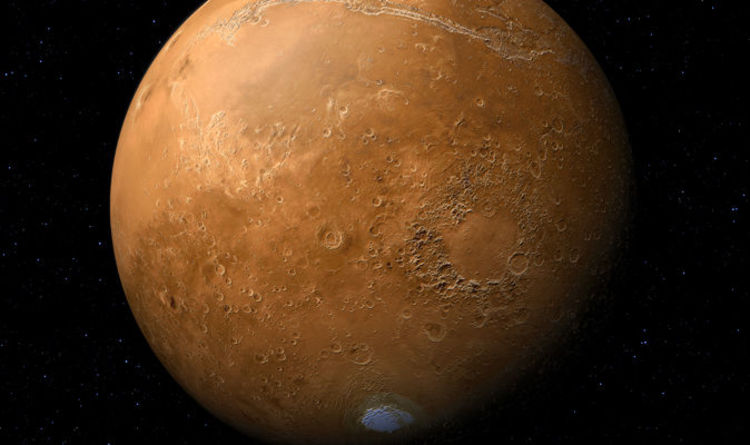 
The lake was discovered on the south polar ice cap of Mars and is covered in a sheet of ice, the thickness of which is yet to be determined.

The body of water is about 20 kilometres across and, if confirmed, would be the first evidence of permanent water on the Red Planet.

Space agency NASA’s Curiosity Rover had found that liquid water does flow intermittently on Mars and it also detected that water had existed there in the past.

But if water is still there, it would mean it has likely been constant throughout Mars’ 4.6 billion year history – making the possibility of life much more likely.

The discovery was made by Italian scientists who were analysing images from the the Mars Express spacecraft – a European satellite.

Professor Roberto Orosei, from the University of Bologna, wrote in the journal Science: “Anomalously bright subsurface reflections are evident within a well-defined 20-kilometre-wide zone.. which is surrounded by much less reflective areas.

“Quantitative analysis of the radar signals shows that this bright feature has high relative dielectric permittivity (electrical polarisation) matching that of water-bearing materials.

“We interpret this feature as a stable body of liquid water on Mars.”

The next step is for space authorities to definitively confirm the body of water is there – and then the search for life begins.

“But we do not know for sure if it is inhabited.”

The water beneath the surface of the Martian south pole may be as low as 30 Celsius, but this would not be too cold for life to survive

This is evident from life which is able to exist in Earth’s sub-freezing north and south poles, and Prof Orosei believes it will be a similar case on Mars.

He said: “Magnesium, calcium, and sodium could be dissolved in the water to form a brine.

“Together with the pressure of the overlying ice, this lowers the melting point, allowing the lake to remain liquid – as happens on Earth.

“This kind of environment is not exactly your ideal vacation, or a place where fish would swim.

“But there are terrestrial organisms that can survive and thrive, in fact, in similar environments. There are microorganisms on Earth that are capable of surviving even in ice.

Scott Hubbard, a professor of astronautics at Stanford University who served as NASA’s first Mars program director in 2000, described the finding “tremendously exciting.”

He added: “Our mantra back then was ‘follow the water.’ That was the one phrase that captured everything.

“So this discovery, if it stands, is just thrilling because it’s the culmination of that philosophy.”

Alan Duffy, an astronomer from Swinburne University and the lead scientist of Australia’s Science Channel, said: “This is a stunning result that suggests water on Mars is not a temporary trickle like previous discoveries but a persistent body of water that provides the conditions for life for extended periods of time.