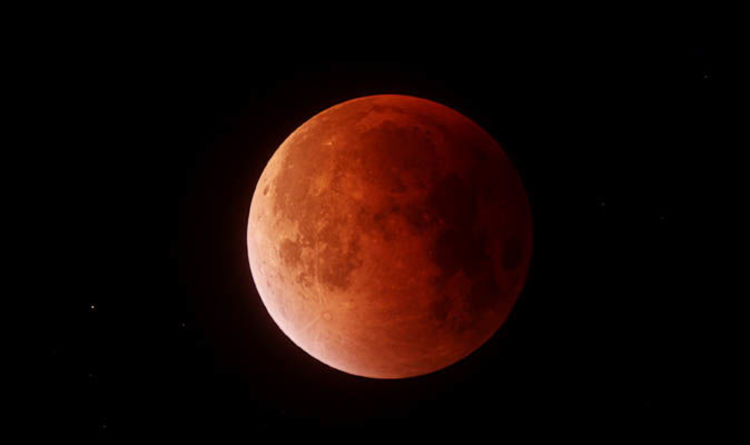 
The Met Office has issued a thunderstorm warning from Friday afternoon that is expected to last until midnight.

The rare celestial event – said to be the longest in the 21st century – will see the moon will pass through Earth’s darkest shadow and take on a red sheen.

But torrential downpours are forecast in places, with as much as 30mm expected to fall in just an hour and 60mm in three hours.

Met Office spokesman Grahame Madge said: “It’s quite tricky at the moment to be precise but there is a potential for showers to develop across the eastern half of the UK.

“There may be large areas where the sky is effectively covered by thunderclouds.

“They will move through reasonably quickly but if that coincides with the peak moment of the eclipse, they could obscure the moon.”

The warning area extends from Cambridge and Peterborough up to the Scottish Borders, Mr Madge said, adding that Wales, the south and west of England and most of Northern Ireland should have clear skies.

Although the lunar eclipse is expected to last 103 minutes, observers in the UK and Ireland will not be able to catch the start as the moon will still be below the horizon.

However, the partial eclipse will be visible for almost four hours.

Dr Gregory Brown, of the Royal Observatory Greenwich, said: “We miss a section of the eclipse due to the moon being below our horizon when it starts.

“South eastern observers will be able to see the eclipse for somewhat longer than north western ones.”

The rising full moon will also change from shining silver to deep blood-red during the eclipse.

Dr Brown said: “At this time, the moon passes into the shadow of the Earth, blocking the light from the sun.

“However instead of turning black as you might expect, the atmosphere of the Earth bends the light of the sun onto the moon causing it to turn a deep red colour.”

Mars will add to the spectacle shining brightly below the blood moon as it reaches perihelic opposition – where the Red Planet and the sun are on directly opposite sides of Earth.

And those awake after 11pm will be able to catch a glimpse of the International Space Station (ISS), as it moves quickly across the sky from west to east. It will appear like a bright star, before fading from sight a few minutes later.

Unlike a solar eclipse, the lunar event can be viewed without wearing protective eye gear.

Dr Brown said: “As the entire eclipse will occur when the moon is fairly close to the horizon, the main thing to ensure is that you have a clear sightline to the south east.

“Try to find an open space or high hilltop clear of trees and tall buildings around you.”

For those living in thunderstorms warning areas hoping to catch a glimpse of the eclipse, Mr Madge says having a clear night sky could be down to luck.

He said: “The thunderstorms will be quite widespread but not necessarily close together and it’s going to be down to fortune whether people in certain locations are able to see this astronomical spectacle.

“It’s likely some people will miss the event because of the storms but, still, it’s worth looking out for and being hopeful.”

The next total lunar eclipse in the UK will take place on January 19, 2019.

A Weird Blob of Hot Gas Is Whizzing Around Sagittarius A* With ‘Mind-Blowing Velocity’ : ScienceAlert
There’s Trouble Bubbling Up in Newly Formed Alaskan Lakes, And Scientists Are Worried : ScienceAlert
REM Sleep May Exist to Heat Your Brain Up From The Inside : ScienceAlert
The Tonga Eruption’s 50 Million Tons of Water Vapor May Warm Earth For Months to Come : ScienceAlert
This Is How Much Fossil Fuel The World Is Sitting on, And It’s a Time Bomb : ScienceAlert