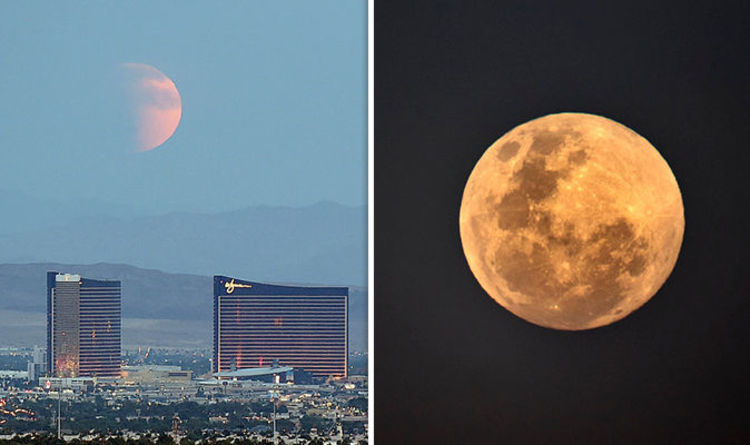 
The longest total lunar eclipse of the 21st Century will take place on Friday evening as the Earth, Sun and Moon perfectly line up.

A BBC explainer has outlined how long the total lunar eclipse will last, where is best to see the eclipse, and why it is called a blood moon.

“The total eclipse phase will last for one hour and 43minutes from 20:21.”

The explained then answered frequently asked questions about the historic event.

It explained how a total lunar eclipse takes place “when the moon passes into the Earth’s shadow.”

The reason there is not a lunar eclipse every month is because the “moon won’t pass through the Earth’s shadow every month as its orbit is tilted”.

The historic event is called a “blood moon” because “many colours from the sunlight are scattered by the Earth’s atmosphere”.

It added: “But red’s longer wavelength gets through, bending towards the moon giving it a reddish glow.”

The lengthy time for the lunar eclipse is because the moon will “pass into the darkest region of the Earth’s shadow called the Umbra”.

Stargazers hoping to catch a glimpse of the longest total lunar eclipse of the 21st Century should get a view from Europe, Asia, Africa, Australia and New Zealand.

“As it rises, you’ll see it more and more clearly and then the eclipse finishes at about a quarter past 10pm.

“It’s just lit by the light that’s filtered through the Earth’s atmosphere which is why it looks this sort of dusty red.”

The next lunar eclipse will take place on January 21 2019.

Behold, The Epic Last Images Taken by NASA’s Asteroid Redirection Test Spacecraft : ScienceAlert
These Are The Most Distant Star Clusters Ever Seen, And We Nearly Missed Them : ScienceAlert
Ancient Burial of a Young Girl Shows How We Carried Our Babies 10,000 Years Ago : ScienceAlert
Deep Brain Simulation Could Alleviate OCD When Other Treatments Have Failed : ScienceAlert
We Just Got Our Closest View of Europa in 20 Years, And We Can’t Stop Staring : ScienceAlert