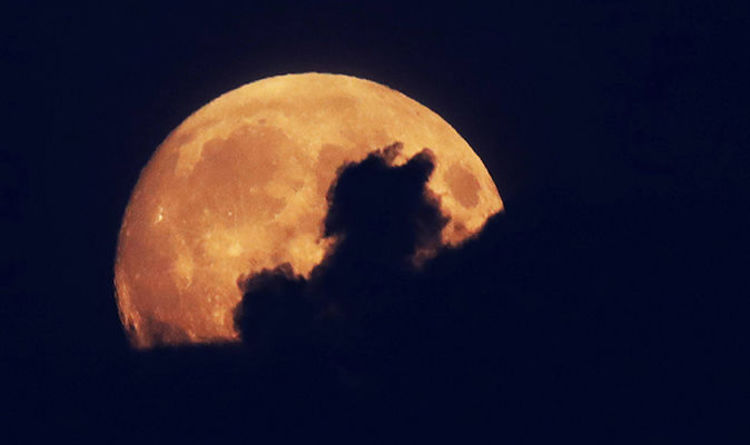 
The Moon is shrouded in myth and has strong ties with religion around the world, bringing light and its cycles representing change for many.

However, tonight a special Moon will be seen in the sky in a lunar phenomenon – the Blood Moon.

The Blood Moon is so named for the red-orange colour it takes on during a lunar eclipse.

Sunlight is refracted through the Earth’s atmosphere, removing all hues except red, bouncing off the moon.

Some preachers believe that tonight’s eerily coloured Blood Moon signifies the end of the world.

This is apparently due to hidden messages in the Christian Bible telling of the end times.

As described in the Bible in Acts 2:20 and Revelation 6:12, Christian ministers John Hagee and Mark Biltz have based a theory on ‘tetrad’ – four consecutive lunar eclipses – which symbolises the end of the world.

This “blood moon” theory is interpreted from the Book of Joel, which says: “The Sun will turn into darkness, and the Moon into blood, before the great and terrible day of the Lord comes.”

The eerie red moon is also mentioned in the Book of Revelation chapter 6 verses 11 – 13, where verse 12 says:

“And I beheld when he had opened the sixth seal, and, lo, there was a great earthquake; and the sun became black as sackcloth of hair, and the moon became as blood”.

Prominent Doomsday preacher Paul Begley agrees with this theory, stating that the apocalypse will be triggered by tonight’s Blood Moon.

The Indiana based YouTuber has said that while tonight’s Blood Moon doesn’t mean the outright end of the world, it is instead the beginning of the apocalypse.

Speaking to his 255,000 YouTube subscribers the preacher said: “Let me say it again. I repeat, July 27 is not the end of the world.

“We are in the final days or the final chapter. We are getting ready to close the end of the age and it is important to understand that.

“Going forward it’s going to get even crazier, so we’re really, really living in the end times.”

The Blood Moon will be visible tonight all over the world apart from Canada and South and North America.

Tonight’s eclipse will be the longest of the 21st century, lasting 103 minutes.

We May Finally Know Why Oceans in The Southern Hemisphere Are Getting So Warm : ScienceAlert
Superconductivity Model With 100,000 Equations Now Contains Just 4 Thanks to AI : ScienceAlert
Biology Inspires a New Kind of Water-Based Circuit That Could Transform Computing : ScienceAlert
3 Major Aquatic Animal Groups Can Trace Their Lineage to This Ancient Armored ‘Worm’ : ScienceAlert
We Just Got Our Closest View of Europa in 20 Years, And We Can’t Stop Staring : ScienceAlert