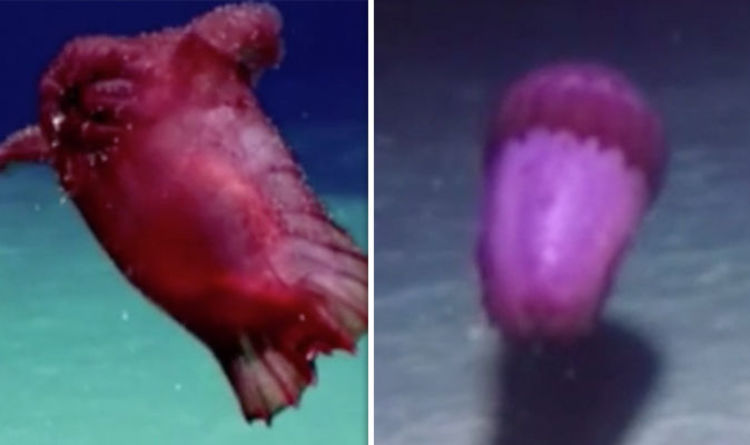 
A bizarre ’headless chicken monster’ has been filmed in the Southern Ocean for the first time, at three kilometres below the sea level surface.

Also known as the ‘Spanish dancer’, the monster is a scarlet-coloured sea cucumber that uses webbed wings to help it swim.

Australian researchers developed camera technology to capture their first footage of the sea cucumber in the Southern Ocean.

Dr Dirk Welford, Australian Antarctic Division programme leader, said: “Some of the footage we are getting back from the cameras is breathtaking, including species we have never seen in this part of the world.

“The housing that protects the camera and electronics is designed to attach to tooth fish longlines in the Southern Ocean, so it needs to be extremely durable.

“We needed something that could be thrown from the side of a boat and would continue operating reliable under extreme pressure in the pitch black for long period of time.”

The creature’s intestines can be seen through its body, especially when it’s soon after feeding time.

The sea cucumber feeds by touching down on the seafloor, eating with its tentacles before shooting back up into the water.

The species has only been previously seen in the Gulf of Mexico.

The footage captured by the cameras are being presented at the annual Commission for the Conservation of Antarctic Marine Living Resources meeting in Hobart today.

Gillian Slocum, Australia’s Commissioner for the meeting, said: “The Southern Ocean is home to an incredible abundance and variety of marine life.

“Including commercially sought-after species, the harvesting of which must be carefully managed for future generations.”

Footage of the mysterious mini-monster tickled Twitter users, with one commenting: “I for one, welcome our new headless chicken monster overlord.”

Another user said: “That simply has to be the best animal name ever. A pretty cool looking sea cucumber to boot.”

A third added: “Happy Halloween to this ‘headless chicken monster’ haunting the sea.”