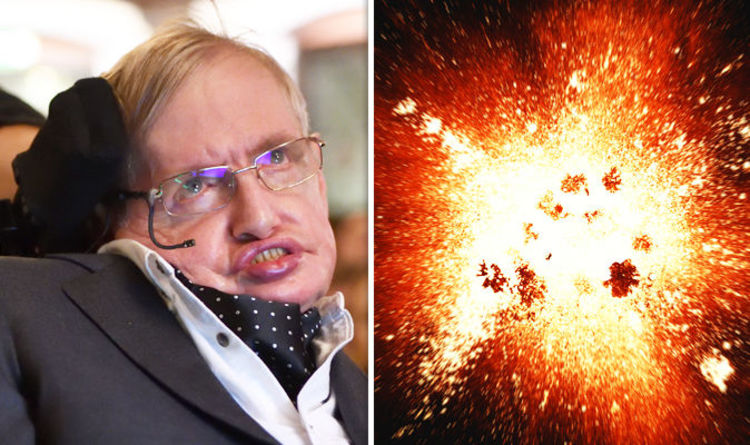 
The famed physicist used Albert Einstein’s General Theory of Relativity to base his statements to one of the most sought after answers ever.

Mr Tyson asked: “What was around before the big bang?”

Mr Hawking replied: “Nothing was around before the big, big bang.

“According to Einstein’s General Theory of Relativity, space and time come together form a space-time continuum or manifold which is not flat but curved by the matter and energy in it.

“I adopt a Euclidian approach to quantum gravity to describe the beginning of the universe, in this, ordinary real time is replaced by imaginary time, which behaves like a fourth direction of space.

“In the Euclidian approach, the history of the universe in imaginary time is a four-dimensional curved surface like the surface of the Earth but with two more dimensions.”

The 76-year-old Hawking explained that there can be “nothing south of the South Pole” as a basis for his argument that claimed that nothing existed before the big bang.

He went on: “Jim Hartle and I proposed a ‘no-boundary condition’.

“The boundary condition of the universe is that it has no boundary.

“In order terms, the Euclidian space-time is a closed surface without end, like the surface of the Earth.

“One can regard imaginary and real time beginning at the South Pole which is a smooth point of space-time where the normal laws of physics hold.

“There is nothing south of the South Pole, so there was nothing around before the big bang.”

Einstein’s General Theory of Relativity attempts to justify how humans perceive the force of gravity that comes from the curvature of time and space.

The German’s theory implies the existence of black holes in the universe.

Meanwhile, the Hartle-Hawking state that was referred to in the interview is a proposal from the legendary physicist and James Hartle, an American physicist, that infers that there was no time before the big bang.

Earth’s Inner Core May Right Now Be in The Process of Changing Direction : ScienceAlert
There’s a ‘Lost City’ Deep in The Ocean, And It’s Unlike Anything We’ve Ever Seen : ScienceAlert
Bacteria Can Use Plastic Waste as a Food Source, Which Isn’t as Good as It Sounds : ScienceAlert
‘Funky Worm’ Fossil Helps Explain The Mysterious Origins of Amphibians : ScienceAlert
Hypertension Drug Shown to Extend Lifespan And Slow Aging in Animals : ScienceAlert