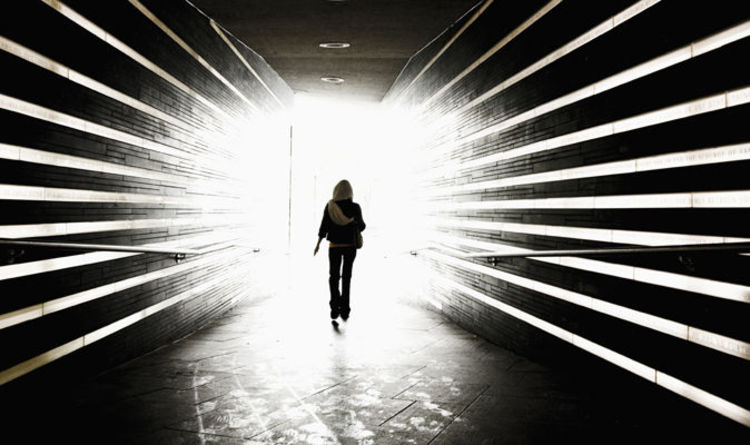 
Members of the public have described how they heard voices of their dead relatives and even caught a glimpse of heaven in the curious claims.

Theresa Cheung, a University of Cambridge graduate, claimed she had an encounter with her deceased mother, whose voice guided her to safety.

Ms Cheung, who has a masters in theology and English, said people are more curious than ever about the idea human spirits are real.

While driving towards a junction behind a lorry, she indicated to turn left until her late mother’s voice told her to go change to the right lane.

She said: “Even though she had died a few years earlier, it was my mother’s voice, and I obeyed instantly.

“If I had turned left, you wouldn’t be reading this now, because I would have driven into a pile-up that claimed the lives of three people in cars directly behind the lorry.

“To this day, I can’t explain that voice, other than that it must have been my mother guiding me from Heaven. It proved to me there is an afterlife.”

She is not the only one who has had experiences that has convinced her of the existence of the afterlife.

Jane Clark works for the Ministry of Justice and says experiences in her life have convinced her heaven must exist.

When Jane was 11-years-old one of her friends awoke from a coma after claiming her grandpa told her to wake up.

Jane says her friend was not expected to live and doctors were prepared to turn off her life support machine before she miraculously came round.

Jane added: “She said her dead grandpa had told her she had to go back. She was absolutely adamant she had been protected by angels.

“I still believe she told the truth.”

Jane is completely convinced it is possible to connect with the spirits after having a former work colleague some to her when she contacted a medium.

She says the medium provided details of specific conversations Jane had with her colleague Danny.

Jane told the Daily Mail: “I absolutely get why people say that this is twaddle, because it is not tangible in terms of something you can see.”

Another woman who was left stunned after being told details of her child’s death that she had never shared before now says she is is fully convinced that a human spirit can survive death.

Ali Norell is a reflexologist-turned-author and saw a medium after her four-month-old’s death Romy.

Ali said: “I’d never met this woman before, or given her any details at all about my life or the fact one of my children had died.

“Straight away, she started talking about a baby or a very young child who had passed very suddenly and quite recently.

“She was also able to give me specific details, not known to anyone else, about how Romy had died.”

These experiences have now been proven to hold some validation/

In 2014 a study showed that consciousness – spirit or soul – can survive brain and body death.

Leading resuscitation expert from University of Southampton, studied the frequency of near-death experiences reported by patients “coming back”

He concluded about one case: “Consciousness and awareness appeared to occur during a three-minute period when there was no heartbeat.

“This is paradoxical, since the brain typically ceases functioning within 20-30 seconds of the heart stopping and doesn’t resume again until the heart has been restarted.

“Furthermore, the detailed recollections of visual awareness in this case were consistent with verified events.”

There’s a ‘Lost City’ Deep in The Ocean, And It’s Unlike Anything We’ve Ever Seen : ScienceAlert
An Iceberg The Size of London Has Broken Free From Antarctica Ice Shelf : ScienceAlert
Hypertension Drug Shown to Extend Lifespan And Slow Aging in Animals : ScienceAlert
Dogs Can Be Aggressive For Lots of Reasons, And One of Them Is You : ScienceAlert
JWST Has Found Life’s Elemental Building Blocks in The Depths of Darkest Space : ScienceAlert