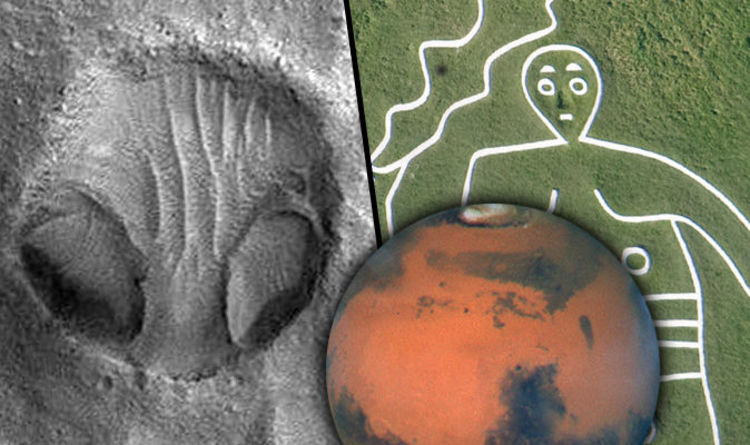 
NASA insists the rock is just a meteorite impact crater that has been left in the unusual form by later erosion.

However, top UFO researcher Scott C waring is convinced there could be more to it and it could be a rock carving, done by a Martian race, in the same way ancient Britons carved out the chalk figures in hillsides like the giant of Cerene Abbas in Dorset and the Long Man of Wilmington in East Sussex.

The image was actually snapped 13 years ago in 2005, but has not been widely reported on.

Mr Waring wrote on his website Ufosightingsdaily.com: “This was found and recorded by NASA on Jan 26, 2005 and yet no one has ever heard of it until now.

“This crater on Mars is called the ‘Chryse Alien’. Yeah, you heard me right. NASA named it after an alien!

“They see an alien face here! The measurement bar in the upper left of the photo tells us how long 150 metres is, so this head is about 350 meters by 400 meters.”

The researcher is convinced it cannot have formed by natural erosion as the measurements are “too precise.”

He said: “The two eyes are each over 250 meters long. and perfectly matched in size and width.

“The ridges along its centre forehead show a unique feature of the alien not often seen.”

Mr Waring is a signed up believer of a conspiracy theory Mars was once occupied by an intelligent alien civilisation who built great cities, which were wiped out by an intergalactic nuclear war.

He has been accused of having an over active imagination after posting on his website rock formations in NASA Mars images that he has claimed are everything from live animals to ruined buildings and fossils.

“The two odd depressions at the north end of the crater (the ‘eyes’) may have formed by wind or water erosion. This region has been modified by both processes, with water action occurring in the distant past via floods that poured across western Chryse Planitia from Maja Valles, and wind action common occurrence in more recent history.”

Sceptics say Mr Waring is experiencing pareidolia – a phenomenon when the brain tricks the eyes into seeing familiar objects or shapes in patterns or textures such as a rock surface or cloud.