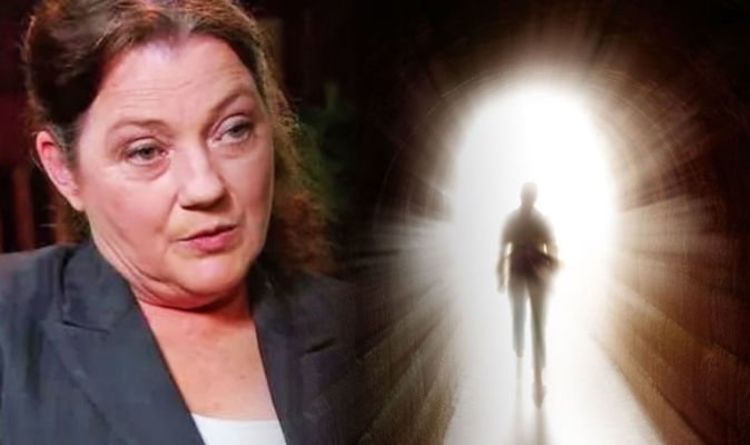 Nancy Murphy is Professor of Christian Philosophy at Fuller Theological Seminary in California, who believes in an afterlife. Dr Murphy’s research interests focus on the role of modern and postmodern philosophy in shaping Christian theology, on relations between theology and science and most recently on the philosophy of neuroscience. However, as a dedicated Christian herself, Dr Murphy has some personal views.

Speaking during Amazon Prime’s “Closer to Truth” series, she outlined why she thinks her belief outweighs scientific evidence.

She said in 2014: “I’m certainly convinced there is an afterlife.

“It comes as an absolutely essential central part of the package of my whole Christian tradition.

“I don’t think that I could provide an independent reason to believe in it, and so it’s a matter of providing reasons to accept the tradition as a whole.

The scientist appeared on an Amazon Prime documentary (Image: AMAZON)

I’m certainly convinced there is an afterlife

“I believe that those Christians who say that Christianity is just about how we live out lives in this world and then you die.

Dr Murphy went on to detail how she believes that one day God will resurrect the dead, as promised in the Bible.

She added: “Easter is the central Christian holiday, it’s the celebration of Jesus rising from the dead, and it’s the promise that we too, will rise from the dead.

“We’re going to be talking [in the afterlife].

She believes the Bible tells the truth (Image: GETTY)

“Christians have inherited a sort of sterile notion of eternal bliss, sitting on clouds, strumming harps or whatever.

Dr Murphy finalised her claim with what she thinks may happen next.

She continued: “Finally, I have figured out what we are going to do with that infinite amount of time in heaven.

“Jesus said there would be no marriage in heaven.

“I don’t know if that means we’ll be celibate or not – but you didn’t hear that from me.”

It comes after a scientist declared he had “compelling and intriguing” evidence of an afterlife during the same series.

Stephen Braude, professor of philosophy at the University of Maryland said: “Yeah, I think it’s [an afterlife] realistic because there are a number of compelling types of evidence.

“There’s also some intriguing new evidence from heart and lung transplant cases where recipients take on personality characteristics of the donors of whom they knew nothing.”

However, most scientists are not in agreement.

Sean Carroll, a cosmologist and physics professor at the California Institute of Technology, claimed to have put the debate to bed after extensively studying the laws of physics.

He said in 2018: “Claims that some form of consciousness persists after our bodies die and decay into their constituent atoms face one huge, insuperable obstacle.

“The laws of physics underlying everyday life are completely understood, and there’s no way within those laws to allow for the information stored in our brains to persist after we die.

“It’s really nothing but atoms and the known forces, there is clearly no way for the soul to survive death.

“Believing in life after death, to put it mildly requires physics beyond the Standard Model.”

Scans of Mummified ‘Golden Boy’ Reveal He Was Covered in Magical Protections : ScienceAlert
One Simple Idea Makes It Much Easier to Manage Your Weight Over Time : ScienceAlert
This Physicist Says Electrons Spin in Quantum Physics After All. Here’s Why : ScienceAlert
‘Funky Worm’ Fossil Helps Explain The Mysterious Origins of Amphibians : ScienceAlert
Major Blow as Experimental HIV Vaccine Fails in Late Clinical Trial : ScienceAlert