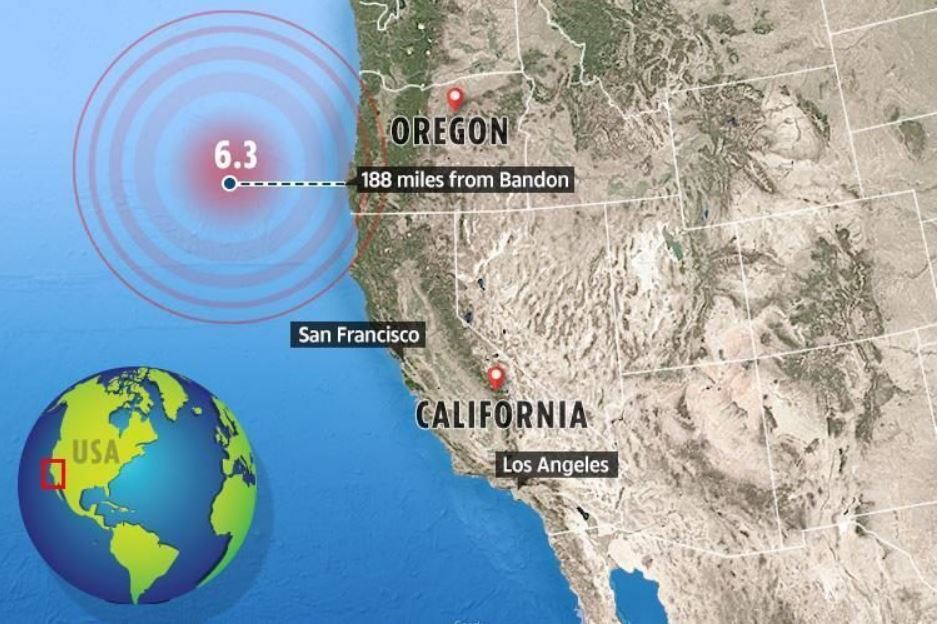 
Another strong earthquake hit off the Oregon Coast Thursday morning at 8:08 a.m.

The M6.3 earthquake struck 171 miles west, northwest of Bandon on Oregon’s south coast at a depth of 3 miles (5.4km). Tremors were felt over 460 miles from the epicenter in the states of Oregon and Washington.

The state of Oregon is located near a 700-mile-long fault known as the Cascadia subduction zone, making the area prone to earthquakes.

The magnitude of the quake was originally reported as M6.4 but was later revised to M6.3.

No tsunami is expected on the coastline, according to the National Tsunami Warning Center.

A M6.3 earthquake has occured 284km WNW of Bandon, Oregon. No tsunami warning has been issued. More here: https://t.co/uyXClrJ8Rf including a Did You Feel It? link pic.twitter.com/B8LVW0BrXy

The earthquake was located on the Blanco Fracture Fault, a transform fault zone running northeast off the coast of Oregon in the Pacific Northwest of the United States which runs between the Gorda Ridge to the south and the Juan de Fuca Ridge to the north. The latter are linked to the very dangerous and overdue Cascadia Subduction Zone.

The strong earthquake comes after more than 64 tremors have rattled California over the past 24 hours, leading some to fear that the Big One is finally coming.

Alaska is burning, the Pacific North West is rumbling. When will the Cascadia or the San Andreas major earthquakes strike?