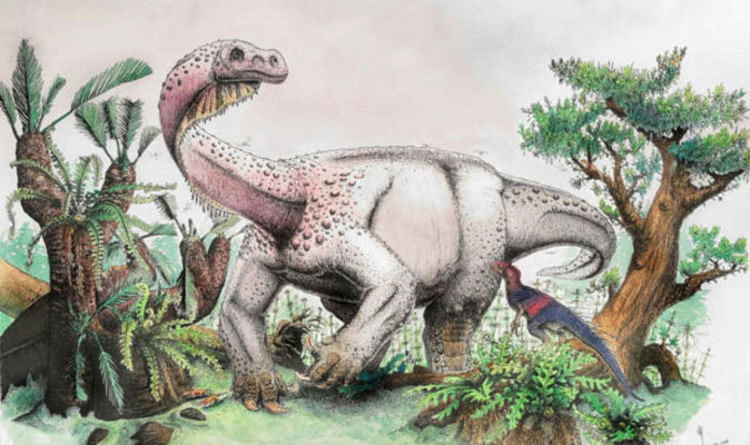 Artist Viktor Radermacher’s reconstruction of what Ledumahadi mafube may have looked like (Image: SWNS)

The relative of Brontosaurus was roughly double the size of a large African elephant, weighing 12 tonnes and standing around four metres (13 feet) tall at the hips.

Named Ledumahadi mafube, scientists say it was the largest land animal alive on Earth at the time.

The dinosaur’s name means “a giant thunderclap at dawn” in Sesotho, one of South Africa’s 11 official languages and an indigenous one in the Free State area where the dinosaur was found.

They estimate that the specimen represented a full-grown adult, about 14 years old.

And they say it lived millions of years before Tyrannosaurus or Velociraptor came on the scene in the northern hemisphere.

Prof Choiniere said: “The name reflects the great size of the animal as well as the fact that its lineage appeared at the origins of sauropod dinosaurs.

“It honours both the recent and ancient heritage of southern Africa.”

He said Ledumahadi mafube is one of the closest relatives of sauropod dinosaurs.

Sauropods, weighing up to 60 tonnes, include well-known species such as Brontosaurus.

All sauropods ate plants and stood on four legs, with a posture like modern elephants.

Ledumahadi evolved its giant size independently from sauropods, and although it stood on four legs, its forelimbs would have been more crouched.

The partial foot of a large sauropodomorph dinosaur (Image: SWNS)

That caused the scientific team to consider Ledumahadi an evolutionary “experiment” with giant body size.

The research team said Ledumahadi’s fossil tells a fascinating story not only of its individual life history, but also the geographic history of where it lived, and of the evolutionary history of sauropod dinosaurs.

Study lead author Dr Blair McPhee said: “The first thing that struck me about this animal is the incredible robustness of the limb bones.

“It was of similar size to the gigantic sauropod dinosaurs, but whereas the arms and legs of those animals are typically quite slender, Ledumahadi’s are incredibly thick.

“To me this indicated that the path towards gigantism in sauropodomorphs was far from straightforward, and that the way that these animals solved the usual problems of life, such as eating and moving, was much more dynamic within the group than previously thought.”

The research team developed a new method, using measurements from the “arms” and “legs” to show that Ledumahadi walked on all fours, like the later sauropod dinosaurs, but unlike many other members of its own group alive at its time.

The team also showed that many earlier relatives of sauropods stood on all fours, that their body posture evolved more than once, and that it appeared earlier than scientists previously thought.

Professor Roger Benson, of Oxford University, said: “Many giant dinosaurs walked on four legs but had ancestors that walked on two legs.

“Scientists want to know about this evolutionary change, but amazingly, no-one came up with a simple method to tell how each dinosaur walked, until now.”

She said: “We can tell by looking at the fossilised bone microstructure that the animal grew rapidly to adulthood.

“Closely-spaced, annually deposited growth rings at the periphery show that the growth rate had decreased substantially by the time it died.”

Dr Botha-Brink said that indicates that the animal had reached adulthood.

She added: “It was also interesting to see that the bone tissues display aspects of both basal sauropodomorphs and the more derived sauropods, showing that Ledumahadi represents a transitional stage between these two major groups of dinosaurs.”

Ledumahadi lived in the area around Clarens in South Africa’s Free State Province.

It is currently a scenic mountainous area, but looked much different at that time, with a flat, semi-arid landscape and shallow, intermittently dry streambeds.

Ledumahadi mafube is the first of the true giant sauropods of the Jurassic (Image: SWNS)

Dr Emese Bordy said: “We can tell from the properties of the sedimentary rock layers in which the bone fossils are preserved that 200 million years ago most of South Africa looked a lot more like the current region around Musina in the Limpopo Province of South Africa, or South Africa’s central Karoo.”

Ledumahadi is closely related to other gigantic dinosaurs from Argentina that lived at a similar time, which Prof Choiniere said reinforces that the ‘super-continent’ of Pangaea was still assembled in the Early Jurassic.

He added: “It shows how easily dinosaurs could have walked from Johannesburg to Buenos Aires at that time.”

Mmamoloko Kubayi-Ngubane, South Africa’s Minister of Science and Technology, says the discovery of the dinosaur underscores just how important South African palaeontology is to the world.

She added: “Not only does our country hold the Cradle of Humankind, but we also have fossils that help us understand the rise of the gigantic dinosaurs.”

Prof Choiniere added: “It shows us that even as far back as 200 million years ago, these animals had already become the largest vertebrates to ever walk the Earth.

“The evolution of sauropods isn’t quite as straightforward as we once thought.

“In fact, it appears that sauropodomorphs evolved four-legged postures at least twice before they gained the ability to walk with upright limbs, which undoubtedly helped make them so successful in an evolutionary sense.”