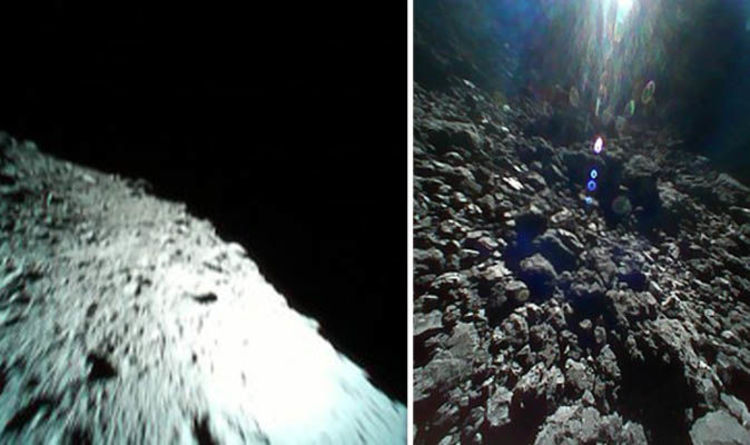 
The asteroid photographs reveal in great detail the pockmarked and boulder-strewn surface of the distant space rock.

JAXA has now shared the latest Ryugu photos taken more than 180 million miles away from Earth.

The space agency said in a brief statement: “The MINERVA-II rovers were deployed on September 21 to explore the surface of asteroid Ryugu.

“Here is the second report on their activities, following our preliminary article at the start of this week.

“We end this report with a video taken by one of the rovers that shows the Sun moving across the sky as seen from the surface of Ryugu.

“Please take a moment to enjoy ‘standing’ on this new world.”

On September 21, Japan dropped two rovers to the asteroid, tasked with photographing and exploring the space rock’s surface.

Unlike more traditional rovers equipped with wheels or tracks, the two MINERVA robots dubbed Rover 1A and Rover 1B “hop around” the planet in unusual fashion.

Now, the new set of photos reveal the moment the two rovers started hopping around the asteroid.

The first Hayabusa picture was snapped when Rover 1B took its fits hop on Ryugu, which explains why it is so blurry.

Another photograph captured the shadow Rover 1A cast across the asteroid.

A brief 15-frame video clip shot by Rover 1B also shows how the asteroid is barrelling towards the Sun.

The video features the incredibly bright star at the heart of the solar system moving across the asteroid’s “horizon”.

Scientists believe Asteroid Ryugu is an incredibly ancient piece of giant space rock – a relic from the infant days of the solar system.

About one year from now, a second Ryugu rover dubber ROVER-2 will join the two MINERVA robots on the asteroid.

The asteroid is estimated to measure roughly 0.6 miles across and is a diamond-shaped, C-type asteroid.

If the Hayabusa 2 probe caries to its operations without a hitch, the spacecraft will return to Earth with a sample of the asteroid.

Why Do Kids Get Worms, And What Can You Do to Prevent It? : ScienceAlert
This Seemingly Simple Foot Feature May’ve Allowed Sauropods to Become Giants : ScienceAlert
These Asteroid Particles May Be Our Most ‘Pristine’ Sample of The Outer Solar System : ScienceAlert
Scientists Say ‘space Bubbles’ Could Shield Earth From The Sun, But Would It Work? : ScienceAlert
Plants Have Been Keeping a Secret From Us About How Thirsty They Actually Are : ScienceAlert