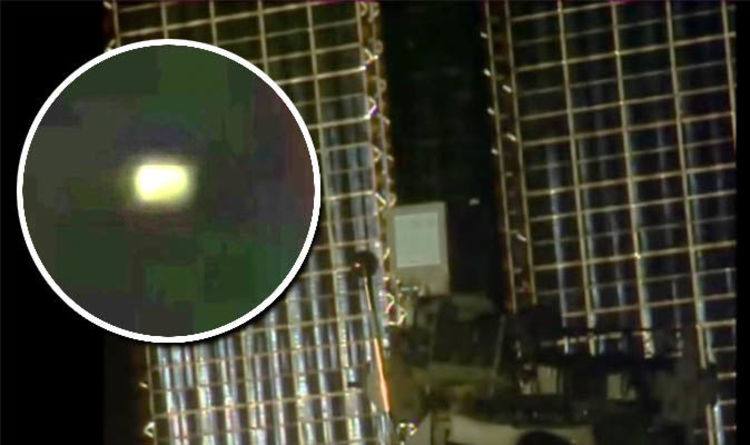 
Notorious UFO hunter Scott C Waring claims to have spotted a “bright” and unidentified object outside the ISS on September 27.

The UFO expert shared stills from the official NASA ISS live stream – a 24-hour live broadcast from the orbital laboratory – which supposedly support his UFO sighting.

Mr Waring said: “You’re looking at a UFO that’s near the space station today and this is September 27, 2018.

“It looks a little like a TR-3B, except maybe four sides on it, so look at that.

“Perhaps it’s even one of those stealth top secret NASA projects.”

Mr Waring claimed to have spotted the UFO passing behind in the far distance behind one of the ISS’ giant solar panel arrays.

His blurry screen-caps of the NASA live feed show a roughly rectangular and grey-to-yellow-ish object behind the ISS.

According to Mr Waring, the object slowly moved from the right side of the stream to the left.

He suggested the alleged UFO could be a new variant of the top secret TR-3B spacecraft – most commonly known in the conspiracy theory circles as the “Black Triangle”.

The UFO hunter also alleged it could be a secret orbital spacecraft developed and tested by the US space agency NASA.

“For some unknown reason, they don’t acknowledge the fact that there are objects seen on the space station live camera.

“And as you see this kind of glowing happening right there in the opposite direction, from the behind – you can’t see it but it does appear to be glowing – that glow whether it’s from the Sun or whatever it is, seems to be also hitting this object over here as well as the space station.”

After zooming in on the indiscernible bundle of pixels in the NASA feed, Mr Waring said it no longer resembles a rectangle.

He said he can clearly make out a “flat disk” on one side, like a “plate that is upside down”.

READ MORE: Is Oumuamua an alien spaceship? Does NASA know the TRUTH behind cigar-shaped asteroid?