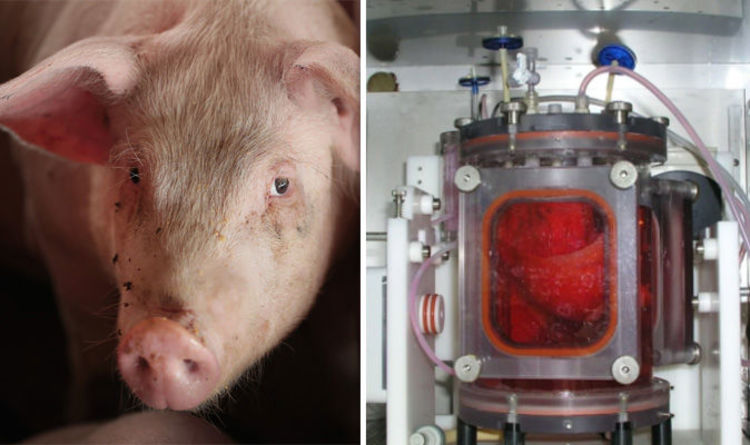 
The revolutionary breakthrough was made at the University of Texas Medical Branch (UTMB), where scientists were able to prove the animals took quickly to the lab-grown lung with relatively few problems.

Within just two weeks, the organs were accepted by the pigs and had redeveloped the network of blood vessels.

Two months later, the lungs were still fully functioning and had 100 per cent oxygen saturation, meaning all their red blood cells were carrying oxygen through the body.

To grow the lungs, the researchers created lung ‘scaffolds’ by removing all of the cells and blood from pig lungs using a mix of sugar and detergent, leaving just the proteins – basically the skeleton of the lungs.

They then took the scaffolding and placed it in a tank of nutrients. Then cells from the recipient pigs real lungs were added and left the lungs to grow for 30 days.

The research took 15 years to complete with countless failed attempts, but the breakthrough could solve the organ donor crisis.

Joan Nichols, Professor of Internal Medicine at UTMB, said: “Our ultimate goal is to eventually provide new options for the many people awaiting a transplant.

“Somewhere down the line we may be able to take stem cells from a person and produce and organ that is their organ, tissue matched to them, with no immune suppression needed that would function the way their own lung originally did.”

“We were able to make much better vasculature in the lungs which hasn’t been done before.

“We were also able to improve from small animal studies to then transplanting them into a larger animal with a larger lung.

“Bioengineered lungs can be made at any time so an individual does not have to wait until an organ is available for them.

You can make it for a paediatric patient as well as an adult patient.”