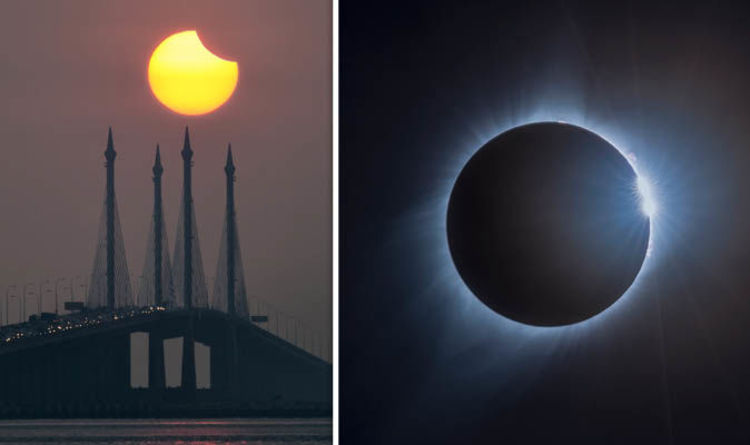 When the August 21 eclipse struck over the continental US on August 21, 2017, the spectacle was dubbed “The Great American Eclipse”.

The total solar eclipse was the most watched solar event in history, with millions watching it outdoors and many more watching it online.

A whole year later and another solar eclipse is brewing on the horizon next weekend on Saturday, August 11.

The August partial eclipse of the Sun will peak in the Northern Hemisphere before 11am UK time but will only be visible in certain parts of the world.

So how exactly do the two brilliant solar eclipses compare?

The major difference is the amount of Sun the Moon will cover two weeks from now, compared to last year’s eclipse.

The August 11 eclipse is only a partial eclipse of the Sun – meaning the Moon will only obscure a small portion of the Sun.

When it peaks, the Moon will cover up to 65 percent of the Sun when viewed from the North Pole.


During the rare celestial event, the Moon’s shadow moved from west to east

In the more populated parts of the world, stargazers will likely only see between five and 20 percent of eclipse coverage.

If you were lucky enough to have seen the total eclipse last year you will recall how the skies suddenly darkened when the Moon passed in front of the Sun like a black disk in front of the fiery orb.

The partial eclipse, on the other hand, will be more reminiscent of the video game character Pacman with a small chunk of the Sun disappearing behind the Moon.

The 2017 eclipse was also a much more spectacular event because of the way it was centralised completely over the US.

On the day of the eclipse, the path of totality covered a 70-mile-wide swathe of 14 US states from the West to East Coast.

NASA explained: “During the rare celestial event, the Moon’s shadow moved from west to east creating a diagonal path of totality in 14 states from Oregon to South Carolina.

“Spectators along the path of totality experienced more than two minutes of twilight in the middle of the day. 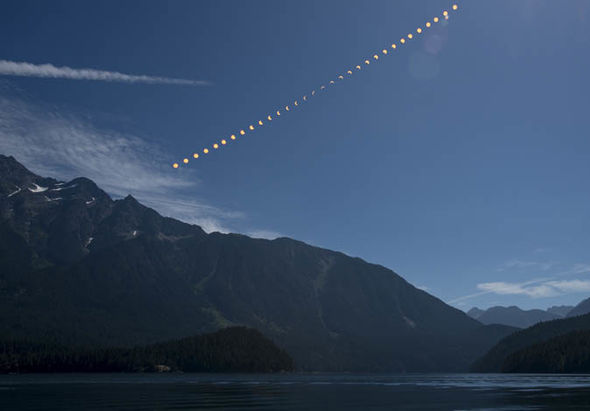 Eclipse 2018: Last year’s event moved from the West to East Coast of the US (Image: NASA)

“Observers in the remainder of North America, and parts of South America, Africa and Europe saw a partial solar eclipse where the moon covered part of the sun’s disk.”

This time around the partial eclipse will be seen from the uppermost parts of Northern Europe, Greenland, Iceland and parts of North and East Asia.

Lucky observers in Scandinavia, China and South Korea should be in a good position to see a small part of the Sun hide behind the Moon.

You can find out if the solar eclipse will pass over your home by clicking and reading here: Eclipse 2018 – Where will the eclipse be visible? 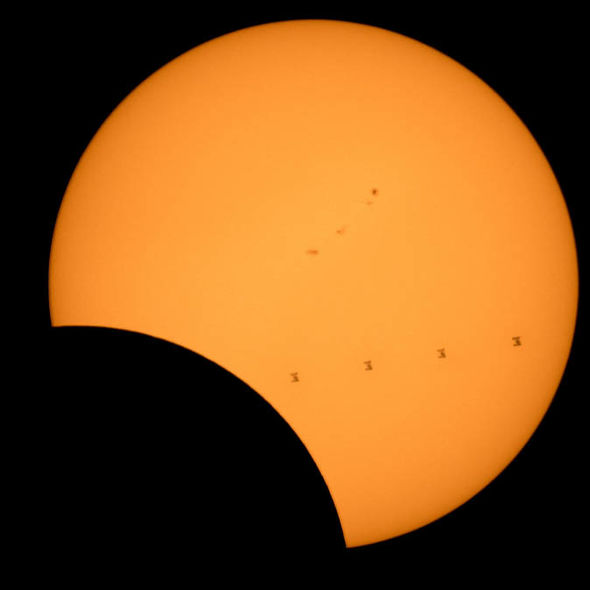 Eclipse 2018: The partial eclipse will only take small chunk out of the Sun (Image: NASA)

But there is one thing that connects both eclipses and that is how dangerous it is to look at them without proper eye protection.

Despite the Sun hiding behind the Moon, powerful UV rays still blast the Earth below, threatening to permanently damage unprotected eyes.

Eclipse-safe glasses hold a designated ISO 12312-2 international standard and are usually stocked by retailers ahead of eclipses.