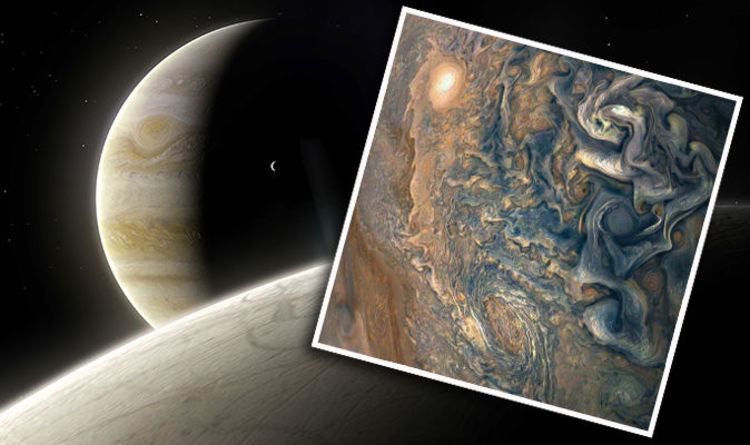 A NASA spokesman said: “Jupiter completely fills the image, with only a hint of the terminator where daylight fades to night in the upper right corner, and no visible limb the curved edge of the planet.”

The Juno spacecraft was a little more than one Earth diameter from Jupiter – or 8,292 miles (13,345 kilometres) – at a latitude of 48.9 degrees when it took the footage.

Scientists Gerald Eichstädt and Seán Doran then processed the picture using data from the JunoCam images.

It shows the vast swirling cloud formations that travel at about 129,000 mph (60 km/s) over the gas giant planet’s surface.

The space agency also released additional images showing the view from high above Jupiter’s clouds. They were processed by citizen scientists David Marriott and Kevin Gill.

Juno comes close to the surface of Jupiter for just a few hours once every 53 days.

The probe cannot take images through the duration of the flyby, but targets select regions during each close approach.

An image capture last year revealed storms which appeared like a string of pearls across the planet’s surface.

At the time, NASA described them as “massive counterclockwise rotating storms that appear as white ovals in the gas giant’s southern hemisphere”.

Since they were first spotted in 1986, these white ovals have varied in number from six to nine, with eight currently visible.

Last year Jupiter’s moon Europa was the centre of a scientific breakthrough which could be used to prove we are not alone in our solar systems.

Scientists at Brown University in the US in a new study found evidence of tectonic plates pushing against one another, a process known as subduction – producing the energy needed for life.

Brandon Johnson, an assistant professor in the Department of Earth, Environmental and Planetary Sciences at Brown University said: “If indeed, there’s life in that ocean, subduction offers a way to supply the nutrients it would need.”

Such nutrients include oxidants, electron-stripping substances that are common on Europa’s surface and that could help provide an energy source for life, according to the researchers.

Europa’s icy surface means that heat cannot be the driving force, but the researchers claim that it does not mean subduction cannot happen.

According to Mr Johnson’s team computer models suggest that Europa’s ice plates can indeed dive — if they are saltier than their surroundings.

The assistant professor said: “Adding salt to an ice slab would be like adding little weights to it because salt is denser than ice.

“So, rather than temperature, we show that differences in the salt content of the ice could enable subduction to happen on Europa.

“It’s fascinating to think that we might have plate tectonics somewhere other than Earth.

”Thinking from the standpoint of comparative planetology, if we can now study plate tectonics in this very different place, it might be able to help us understand how plate tectonics got started on the Earth.”

Scientists Achieved Self-Sustaining Nuclear Fusion… But Now They Can’t Replicate It : ScienceAlert
Astronomers Charted The Sun’s Life, And This Is How The Story Ends : ScienceAlert
A Snake-Lover Built Robotic Legs For a Snake, and It’s Insane : ScienceAlert
Scientists Say ‘space Bubbles’ Could Shield Earth From The Sun, But Would It Work? : ScienceAlert
Researchers in South America Discover a New Species of Tiny but Tough Dinosaurs : ScienceAlert