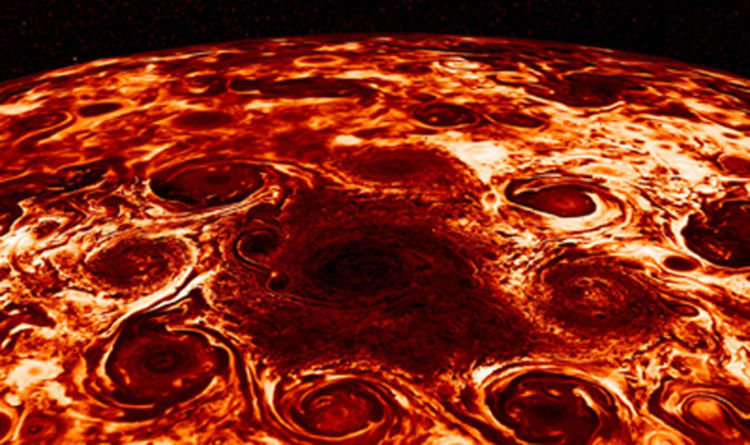 
Nasa released the images of the swirling storms after its Juno spacecraft captured the mesmerising sight.

The storm is made up of a mixture of liquid hydrogen and helium in the centre with huge jet streams hitting the atmosphere.

Juno’s images have revealed what lies beneath the murky clouds of Jupiter – commonly dubbed the King of the Solar System as it is by far the biggest planet in our galactic neighbourhood – for the first time.

Aerospace engineering professor Luciano Iess of Sapienza University of Rome, added: “On Jupiter, a gaseous planet without a solid surface, we can only gather information from orbit.”

Planetary science professor Yohai Kaspi of the Weizmann Institute of Science in Israel, who led part of the research, said: “Galileo viewed the stripes on Jupiter more than 400 years ago.

“Until now, we only had a superficial understanding of them and have been able to relate these stripes to cloud features along Jupiter’s jets.

“Now, following the Juno gravity measurements, we know how deep the jets extend and what their structure is beneath the visible clouds. It’s like going from a 2-D picture to a 3-D version in high definition.

“Juno is designed to look beneath these clouds.”

Jupiter is a gas giant, which would be opposite to a solid planet like Earth of Mars.

The researchers were surprised to find that the jet streams plunge about 1,800 miles beneath the brown clouds of Jupiter.

The planet is made up of 99 percent hydrogen and helium and Juno’s data shows that the farther you go towards the surface, the gasses become so dense that they form a hot, dense metallic liquid which acts as a core.

Planetary scientist Tristan Guillot of the Universite Cote d’Azur in Nice, said: “The very center may contain a core made of high-pressure and high-temperature rocks and perhaps water, but it is believed to be fluid as well, not solid.”

Juno will continue to orbit Jupiter until July this year – after this, the spacecraft will plunge towards Jupiter, which has a mass 317 times that of Earth’s, in what will destroy the machine, all the while giving valuable data to scientists.