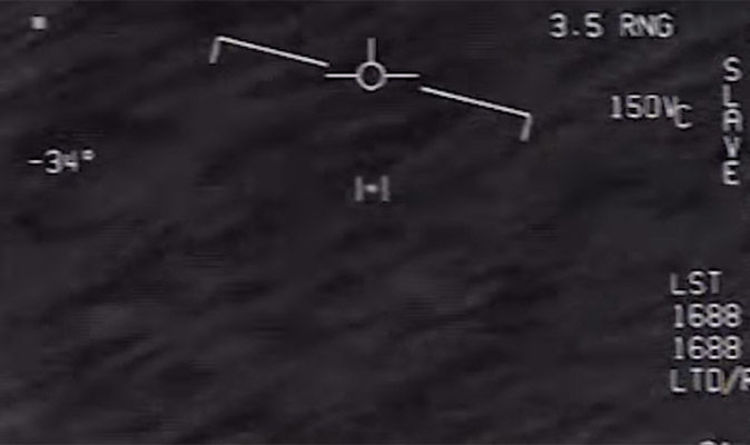 
The eerie declassified video reveals the moment the US pilots spot the mysterious oval object, which does not have any visible flight technology.

In the mysterious video, the pilots themselves are astonished and stunned by the sight, with one pilot even saying “What the f*** is that?”.

Pilots of the American warplane record the flying object, which moves faster than any known US Air Force aircraft along the US East Coast at an altitude of 7,500 meters.

The footage, from a 2015 encounter, fails to identify the object which is oval-shaped and has “no obvious wings or tails”.

According to the conversation in the video, the Weapon Systems Operator (WSO) only managed to capture the object on the third attempt.

The recorded exchange between the two pilots reveals a stunned reaction to the object, with one of them saying: “Oh my gosh, dude. What the f*** is that thing?”

The other pilot adds: “Look at that thing fly! What is that man?”

Analytical company To the Stars Academy of Arts and Science originally published the video, recorded by pilots of an /A-18 Super Hornet multirole combat jet.

Christopher Mellon, a former defence official in the George W. Bush and Clinton administrations said the videos, along with observations by pilots and radar operators, “appear to provide evidence of the existence of aircraft far superior to anything possessed by the United States or its allies”.

He said the the US had either been “technologically leapfrogged by Russia or China”, or these videos “are evidence of some alien civilisation”.