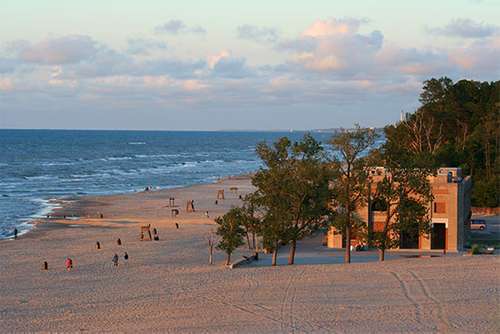 
An Indiana steel plant dumped toxic levels of cyanide and ammonia-nitrogen in the Little Calumet River.

Dead fish and toxic chemicals in the water have caused several beaches in Northwest Indiana to close, including parts of the Indiana Dunes National Park.

While the dead zone in Chesapeake Bay is growing like crazy, companies and industries are polluting rivers across the world. One of the latest example of water poisoning occurred in Northwest Indiana. There, state officials accuse a steel plant belonging to ArcelorMittal of dumping toxic levels of cyanide and ammonia-nitrogen in the Little Calumet River in Portage.

According to officials, ArcelorMittal exceeded the daily maximum total for cyanide and ammonia nitrogen release. The Indiana Department of Environmental Management has requested ArcelorMittal help clean up the spill and monitor the river’s chemical concentration.

The National Park Service said the water out to 300 feet at the national park’s Portage Lakefront and Riverwalk beach area has been closed since Wednesday. Portions of the Little Calumet River were closed between Highway 149 and 249, the park service said. The trails remain open.

“Of course, we want to keep people out of the water here until we really know what’s in there and what the effects might be,” Rowe said.

Dead Fish But Residents Not So Surprised

The effects of the spill, which reportedly could have happened as early as Wednesday, are already being seen.

At the Sammie Maletta Public Marina, the sun set Friday on scores of dead fish.

“I seen all the fish swimming in circles, going belly up and it wasn’t like a couple. I looked around. They were up on the shores. They were everywhere.”

“The odor is unbelievably bad because they decay pretty quickly,” said Barb Lusco, harbormaster. “So the odor is just awful. You can’t stand it.“

But some residents weren’t too surprised.

“We have always lived in this area and grown up with mills,” said Vicki Mason, a Portage resident. “My husband worked at U.S. Steel so I guess we kind of know what happens here.“

Forbidden To Go In Water Or Fish

The mayor of Portage has criticized the Indiana Department of Environmental Management along with the steel company, saying that they knew that there was a problem and were slow in notifying the city.

“IDEM needs to be held accountable to let our residents and our visitors know what’s going on,” Mayor John Cannon said. “This is the middle of summer. This is the height, the peak of fishing season.“

In the meantime, officials with nearby city of Ogden Dunes say their drinking water is OK, despite concerns from some residents.

In the meantime, state officials said they do not want anyone going into the water or eating any fish from the water until their investigation reveals more details.