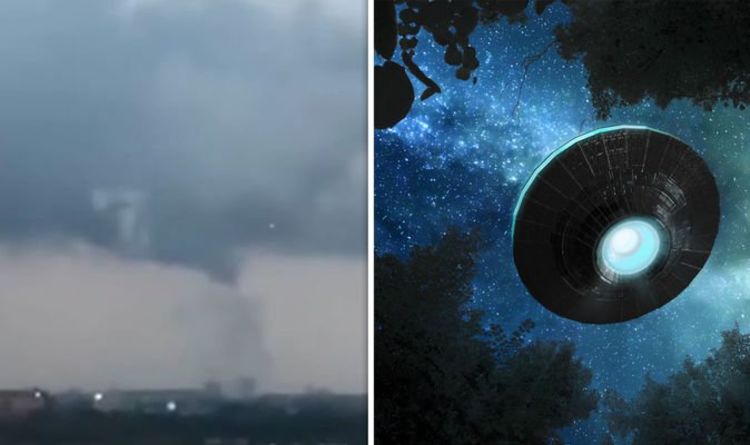 
The strange object sparked theories of possible extraterrestrial sightings  and even “dark angels”. A video showed the mystery object on YouTube channel Mavi777, which depicts a strange glowing object flying in the sky above the tornado. One user commented on the video claiming the “orb lights” are the “fallen ones”.

The user claimed that “cattle mutilations are the work of these orbs which are dark angels.”

They continued: “They are also responsible for the crop circles.”

Another said: “Unbelievable footage. We are not alone.”

However, one user offered a more mundane explanation for the flying object.

READ MORE: UFO claim: ‘Stunning’ US Navy sightings are ‘most important in 70 yrs’

They said that the objects are just weather drones sent to gauge the power of the tornado.

Another strange phenomenon was spotted this month in the skies above Brazil.

A massive shining figure was recorded flying in the cloudy sky.

The footage showed the peculiar entity changing direction whilst maintaining its shape.

A video was uploaded on YouTube showing a T-shaped shining object roughly resembling an angel in a long robe.

The cameraman said in the video: “It looks like light refraction but then again it looks like some type of energy source.

“It’s even got the harmonious appearance of an angel.”

An explanation for both events remains unclear.

People Who Don’t Exist Look More Real Than Actual People, Study Finds : ScienceAlert
JWST Has Found Life’s Elemental Building Blocks in The Depths of Darkest Space : ScienceAlert
Earth’s Inner Core May Right Now Be in The Process of Changing Direction : ScienceAlert
Scientists Create Shapeshifting Humanoid Robot That Can Liquefy And Reform : ScienceAlert
There’s a ‘Lost City’ Deep in The Ocean, And It’s Unlike Anything We’ve Ever Seen : ScienceAlert