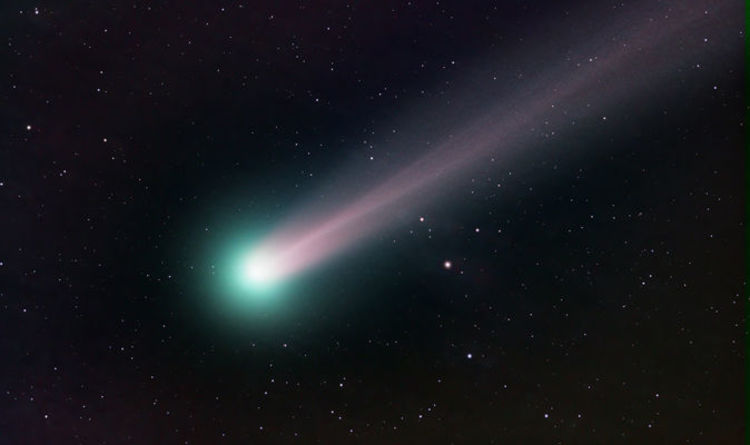 
The strange comet is a first time visitor to our solar system, and unfortunately it might be the last.

Nicknamed the Incredible Hulk, for its green glow, the comet was set to be visible with the naked eye, but as it got closer to the sun, it began to break up.

Experts fear the comet, which is reaching as close as 113.4 million km (70.4 million miles) away from Earth, will cease to exist as it heads closer to the sun.

Austrian comet expert Michael Jäger told spaceweather.com: “The comet is just a remnant of its former self. It is fading, becoming more diffuse and elongated each time I look.”

The gas cloud of the comet, which is technically called PANSTARSS C/2017, is twice the size of Jupiter, and as it has never travelled through our solar system before, scientists are unsure how it will react to the sun.

Russian comet and meteorite researcher Yevgeniy Dmitriyev said: “The size of the gas-dust cloud of the celestial body is at least twice the size of the largest planet in the Solar System: Jupiter.”

The green glow comes from carbon and cyanide gas within the comet which is ionised as it approaches our host star.

The Incredible Hulk has travelled from the Oort cloud – a disk of asteroids, comets and meteors which surrounds our solar system.

However, he added that millions, if not billions, of similar objects have passed safely by our planet in the past and the comet and its tail of “giant electrified gas cloud” pose no threat to humanity.

Experiment Reveals What 1 Hour in Nature Does to The Human Brain : ScienceAlert
One of The World’s Largest Organisms Is Disintegrating. Here’s How We Might Save It. : ScienceAlert
Why House Fly Barf Is an Overlooked Potential Vector of Disease : ScienceAlert
There Are New FDA Safety Warnings About Breast Implants. Here’s What We Know : ScienceAlert
Wolves Really Can Become Attached to Humans Like Dogs Can, Adorable Study Finds : ScienceAlert