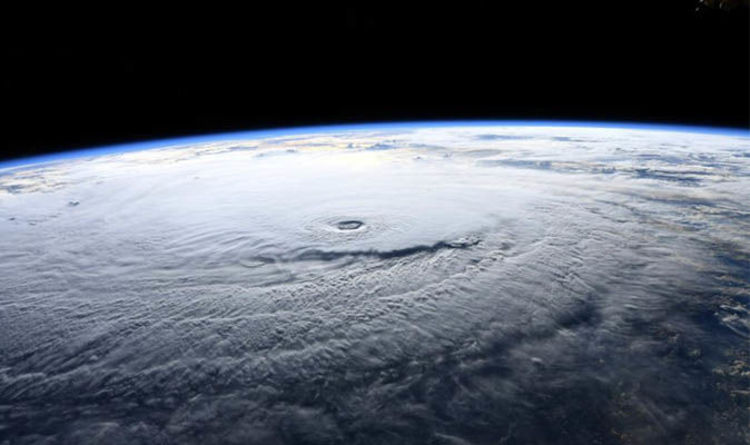 
Hurricane Lane is now within striking distance of Hawaii, according to the latest US National Oceanic and Atmospheric Administration (NOAA) cyclone update.

Forecasters fear the Category 4 hurricane could come as close as 80 miles southwest of the island of Oahu by Friday afternoon, August 24.

Hurricane Lane is the single biggest hurricane on this scale to come this close to Hawaii in recorded history.

NOAA predicts the storm could dump up to 30 inches of rainfall on Hawaii, as it ravages the Pacific islands with 145mph wind speeds.

Mr Arnold, a NASA astronaut with ISS Expedition 55/56, sent his best wishes to the people of Hawaii after he witnessed the scale of the storm.

He tweeted: “Hurricane Lane in the early morning hours near Hawaii. The crew of the space station sends much aloha to everyone there.”

The astronaut took two pictures of Hurricane Lane as the international orbital laboratory passed over the Pacific Ocean near Hawaii.

The ISS completes between 15 and 16 orbits of the Earth every 24 hours, passing through the dayside and nightside of Earth.

More aerial views of the raging cyclone have emerged thanks to NASA’s fleet of GOES geostationary satellites.

The last GOES-West photo of Hurricane Lane, dated 8.30am on August 23, shows the eye of the storm just south-southeast of Hawaii’s Big Island.

Hurricane Lane was upgraded to a Category 5 cyclone on Wednesday after its incredible winds speeds broke the 157mph threshold.

“Storm motion has begun to take more of a northerly component as it continues to approach Hawaii.”

As of 11pm local time, Hurricane Lane is now pushing max sustained winds up to 145mph with occasional higher gusts and is currently a Category 4 storm.

The hurricane’s centre is currently about 235 miles (380km) south of Kailua-Kona and about 350 miles (565km) to the south-southeast of the capital Honolulu.

NASA’s GOES-15 satellite tracked the eye of the storm at a one-mile-resolution churning over the Pacific.

Although some weakening is forecast during the next 48 hours, the situation remains incredibly dangerous.

The US National Weather Service office in Hawaii said the hurricane has already unleashed more than eight inches of rainfall during the last 12 hours.

A hurricane warning is currently in effect for Oahu, Maui County and Hawaii County.

Hurricane warnings mean hurricane conditions are expected to descend on the area and are issued typically 36 hours before this happens.

A hurricane watch is in effect for Kauai County, including the islands of Kauai and Niihau.

Cyclone-level wind speeds and conditions are possible in these areas in the next 48 hours.

REM Sleep May Exist to Heat Your Brain Up From The Inside : ScienceAlert
How Many Ants Live on Earth? Scientists Came Up With an Answer : ScienceAlert
JWST’s First Glimpse of Mars Reveals The Red Planet in a New Light : ScienceAlert
A New FRB Signal Has Buzzed Nearly 2,000 Times in Just Two Months, Raising a Mystery : ScienceAlert
Early Puberty in Girls Surged in The Pandemic, And We May Finally Know Why : ScienceAlert