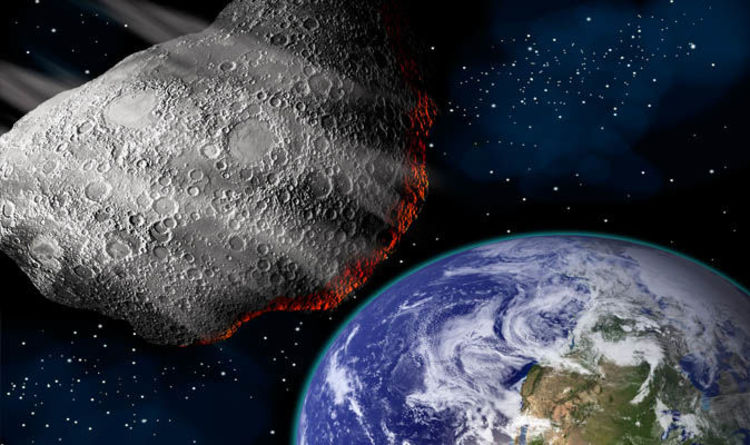 
The giant asteroid will skim the planet after midnight on the morning of Friday, August 24, about 12.44am UT.

The asteroid is currently barreling towards the planet at incredible top speeds of 31,384mph or 14.03 kilometres per second.

At this speed, Asteroid PR9 moves at nearly half the orbital speed of the Earth around the Sun – about 67,000mph.

Asteroid PR9 also moves nearly 14-times faster than the Moon does around our planet.

The asteroid’s top estimated diameter is larger than the 157-foot-tall (48m) Colosseum in Rome, Italy and up to 11 times more than the Great Wall of China.

The space rock’s trajectory through the solar system will see the asteroid come within 3.7 million miles (5.9 million km) of Earth.

Asteroid PR9 will approach Earth within 18 lunar distances – the average distance from the Earth to the Moon.

The figures in question might seem incredibly distant to observers on Earth, but on the cosmic scale o things, 3.7 million miles warrants interest from NASA’s astronomers.

Asteroid PR9 is classed as an NEO space rock or Near-Earth Object.

NASA explained: “As they orbit the Sun, NEOs can occasionally approach close to Earth.

“Note that ‘close’ passage astronomically can be very far away in human terms – millions or even tens of millions of kilometres.”

But NASA stressed there is always a degree of uncertainty when analysing the data of close approach asteroids.

These uncertainties can be accounted for by the quality and number of observations, as well as their geometry.

The space agency said: “Of these parameters, the time spanned by the observations generally has the greatest effect on orbital uncertainty.”

But Asteroid PR9 is not the only giant space rock to flyby the Earth this month – it is one of eight between today and August 30.

An asteroid bigger than the Pyramids, dubbed Asteroid NF23, will skim the planet next week on Wednesday, August 29.

Another asteroid, Asteroid SD9, will come dangerously close on the same night approaching the Earth within 4.22 lunar distances or just over one million miles (1.6 million km).

Any NEO that measures more than 459 feet (140m) in size is classed by NASA as a “potentially hazardous” object.

Asteroids of this size carry a number of impact risks, with some of the bigger ones capable of levelling entire cities and killing millions.

Astronomer Lori Allen, who published a paper on NEOs last year, wrote: “While very large – 10 km-sized – impactors can induce mass extinction events like the event that led to the demise of the dinosaurs, much smaller impactors can also wreak havoc.

“The meteoroid that exploded in Chelyabinsk unleashed a powerful shock wave that destroyed buildings and blew people off their feet.

“Relatively petite at a ‘mere’ 17 meters in diameter, comparable to the size of a 6-story building, the impactor, when it exploded, released about 10 times the energy of the Hiroshima atomic bomb.”