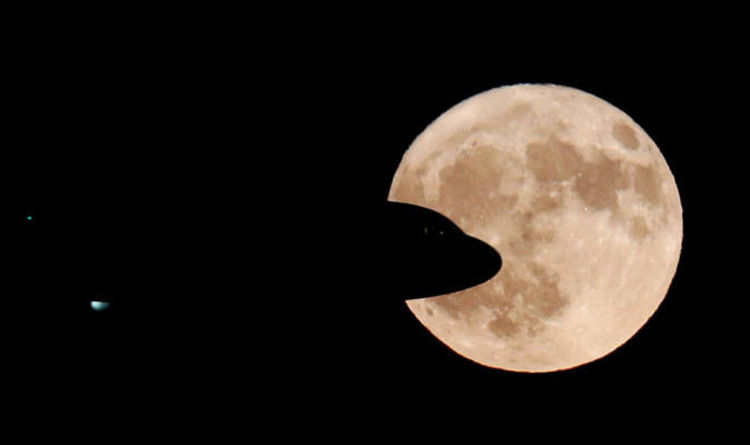 
On October 24, people who live in the northern hemisphere could see a Full Moon rise.

This month the full Moon is called the Hunter’s Moon.

The incredible sight of the Moon was fully visible into the early hours this morning.

Why is the Moon so big this morning?

The Hunter’s Moon is generally not bigger or brighter than any of the other full moons, although it may appear so.

According to meteorologist Brian Doogs, the only difference between this and other Full Moons is the time between sunset and moonrise is shorter, making a narrow angle.

The narrow angle means the Moon rises noticeably farther north on the horizon from one night to the next.

So there is no long period of darkness between sunset and moon rise.

Normally the Moon rises 50 minutes later each day, but for the Hunters Moon it’s different.

The Hunters Moon rise 30 minutes later on each successive night.

Mr Doogs wrote: “It also means around the time of full moon, you will see the moon in a twilight sky.

“This can lead to the orange color and what appears to be a larger Moon.

“The orange color near the horizon is a physical effect.

“It stems from the fact that, when you look toward the horizon, you’re looking through a greater thickness of Earth’s atmosphere than you are looking overhead.”

The Full Moon officially happened at 11:45 AM, we will still see its vibrant glow through Thursday morning with an illumination of 99.6 percent.

Why is it called the Hunters Moon?

The Hunters Moon got its name because the Moon has traditionally been used by hunters and farmers to finish their work.

Every Full Moon is given a name and many of them can be traced back to the Native Americans and were passed on to colonial Americans when they arrived in North America.

The Old Farmer’s Almanac said: “The Algonquin Native American tribes referred to October’s moon as the full Hunter’s Moon because it signalled the time to go hunting in preparation for winter.

But in southeastern Asia, the Hunters Moon is given a different name.

The month of October typically marks the end of the monsoon season and influences the names for the Full Moons.

Old Farmer’s Almanac said: “For Hindus, this full moon is Sharad Purnima, a harvest festival marking the end of the rains.

“For Buddhists, this full moon is Pavarana, the end of Vassa – sometimes given the English names ‘Rains Retreat’ or ‘Buddhist Lent’ – the three-month period of fasting for Buddhist monks tied to the monsoons.”

Forests at Risk of Burning an Extra 30 Days a Year Without Climate Action : ScienceAlert
Some People May Make Extreme Snap Judgements About You Thanks to Face-ism : ScienceAlert
Astronomers See a Star’s Final Scream Into a Black Hole Halfway Across The Universe : ScienceAlert
Cannabis For Pain Relief? Review of 20 Studies Provides Sobering Results : ScienceAlert
Grim Study Shows 10 Years of ‘Carbon Offsets’ in California Had No Climate Benefit : ScienceAlert