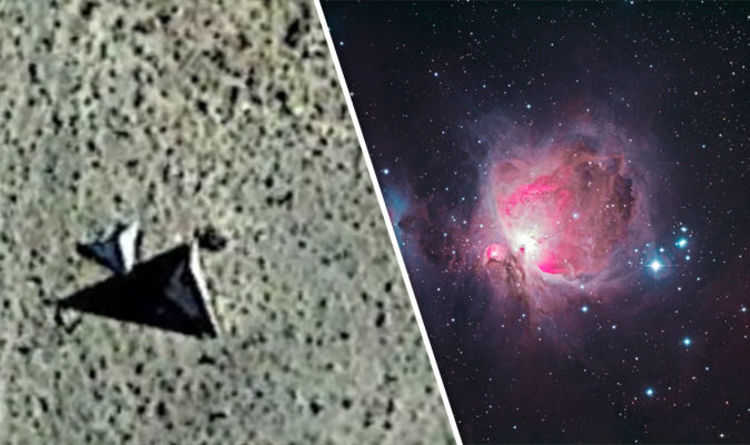 
Global powerhouses are in a race to get back to the moon, and ultimately to Mars, and conspiracy theorists are speculating the US could be leading the race after spotting something suspicious.

Users of Google Earth have been trawling the online globe to spot any suspicious activity and believe they have found something in New Mexico.

Two triangular crafts have been spotted in the middle of a massive 900 metre circle in the desert of New Mexico.

To make matters more mysterious, the two crafts, one much larger than the other,were found near the Holloman Air Force Base.

The Holloman Air Force Base is something of a UFO hotspot and was centre of a 1974 documentary which claimed experts there had been in contact with aliens.

Now conspiracy theorists believe that authorities at the air force base are using their ET knowledge to get into space.

The narrator of a video uploaded to YouTube by UFO hunting channel Third Phase of the Moon said: “What’s really strange is that when I first searched these coordinates, Google Earth didn’t really work so we had to go through a few different ways of trying to find this location.

“It looks like a craft but whatever it is is very advanced as you can see there is no landing pad.

“It Could be involved with the space race.”

Some were quick to agree with Third Phase of the Moon’s theory.

One user, Amy Lou, commented on the video: “I do believe a lot of the triangular crafts that appear dark like this are our government’s replicas of alien technology. But I also believe the some are extraterrestrial in origin.”

However, other users had more logical theories.

Armond Gillian added: “They look like a couple of shade cloth tarps to keep the sun off whoever is under them. They don’t look solid. The two shapes have indentations in them. It’s hot as hell out there right now.”

A Common ‘Forever Chemical’ Has Just Been Linked to Liver Cancer in Humans : ScienceAlert
Robot Shows It’s Possible to Swim Through The Emptiness of a Curved Universe : ScienceAlert
New Predictions Reveal The Fate of The World’s Biggest Ice Sheet if We Don’t Act : ScienceAlert
Minor Google Meltdown Exposes The World’s Utter Reliance on a Single Tech Company
Thinking Hard and Long Can Cause Brain Drain : ScienceAlert