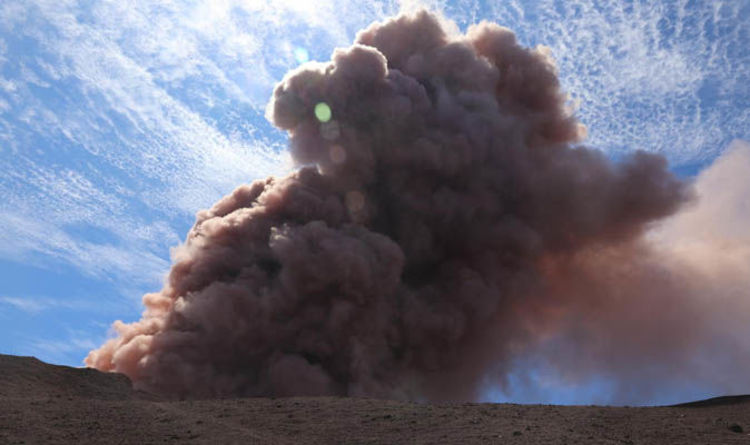 
The Hawaiian Volcano Observatory (HVO) issued a notice: “The eruption in the Leilani Estates subdivision in the lower East Rift Zone of Kilauea Volcano that began in late afternoon of May 3rd ended by about 6.30pm HST.

He issued a warning to residents living near the volcano: “Please be alert and prepare now to keep your family safe.”

No injuries or deaths have been reported yet.

Images from social media and drone footage showed cracks opening up across roads and molten rock bursting out in the lower East Rift Zone of the Kilauea volcano.

Resident Ikaika Marzo told the Honolulu Star Advertiser lava fountains were shooting 150 feet in the air and molten lava was spreading out over an area about 200 yards wide behind one house in Leilani Estates.

Where is Kilauea volcano on Big Island?

Kilauea can be found on the Big Island of Hawaii on the southeastern slope of Mauna Loa in the Hawaii Volcanoes National Park.

Big Island sits in the southeastern most part of the island chain, in the Pacific Ocean.

It is one of the largest active craters in the world and has a circumference of 8 miles (13km) and is surrounded by a wall of volcanic rock 200ft to 500ft high.

The volcano is the youngest in Hawaii and there have been 34 eruptions since 1952 and 61 eruptions in total.

The Kilauea volcano has been erupting continuously for more than three decades and is one of five active volcanoes in Hawaii, others are Loihi, Mauna Loa, Hualalai and Haleakala.

We May Finally Know How Lightning Gets Its Zigzag Shape : ScienceAlert
Lyme Disease Is on The Rise, But There Might Be Hope in a New Vaccine : ScienceAlert
Psychologists Found a Weird Trick That Changes How Food Tastes : ScienceAlert
Mars Once Had So Much Water, It Could Have Been An Ocean World, Scientists Say : ScienceAlert
Mysterious Tendrils Inside The Brain May Control Our Perception of Time : ScienceAlert