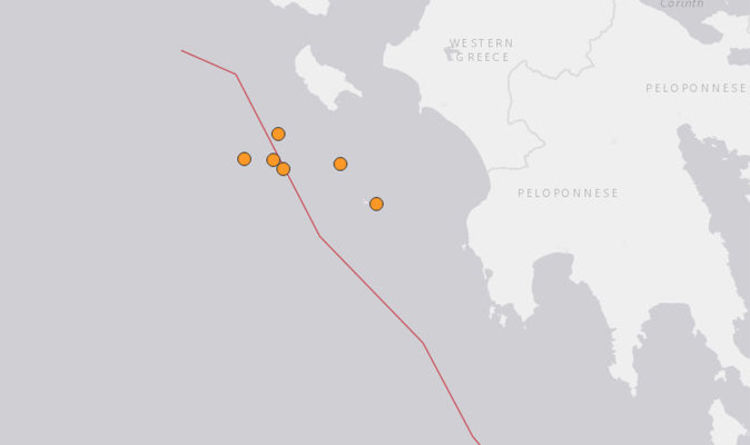 
The quakes hit near the island of tourist hotspot Zante at around 2.30 PM local time.

The strongest of the tremors was a 4.8 on the richter scale, followed by a magnitude 4.5 quake and hour later.

As it stands, there are no reports of damage to buildings, injuries to civilians and Zante is at no risk of tsunami.

Both earthquakes were at a depth of 10 kilometres.

The tremors come just days after Zante, which is a popular holiday destination for Brits, was rocked by earthquakes.

A massive 6.8 magnitude quake struck in the Ionian Sea close to Zakynthos, also known as Zante, on Friday morning, October 26.

Tremors were first felt just before 2am local time.

The earthquake had a depth of around 16 kilometres and according to reports it lasted 15 to 30 seconds.

The tremor was felt in the Greek capital of Athens, and as far away as Albania, Italy, Libya and Malta.

At least three people were taken to the hospital, but there were no reports of serious injuries.

Thirty minutes before the powerful earthquake struck, a quake with a magnitude of five stuck close to Lithakia.

The European-Mediterranean Seismological Centre (EMSC) said the earthquake sparked a small tsunami of 15 to 20 cm on local beaches.

Local media reported that a 15th century monastery in the Strofades area of the island had been damaged.

Zante’s main harbour in the Ionian Sea was damaged but according to civil protection agency press spokesman Spyros Georgiou, it is still functional.

He said: “We’re checking out the villages on the island, where there are several older buildings.

“The lack of electricity is a problem, but technicians are trying to restore power.”

Europe, particularly in the south, is extremely prone to earthquakes as two huge plates – the Eurasian, which covers Europe and most of Asia, and the African plate which goes all the way down to Antartica – are slowly colliding.

Tremors where the Eurasian and African Plates meet are increasing as the historic fluctuation between the two is currently on the rise as tension increases beneath the surface.

“Calm is being restored.”