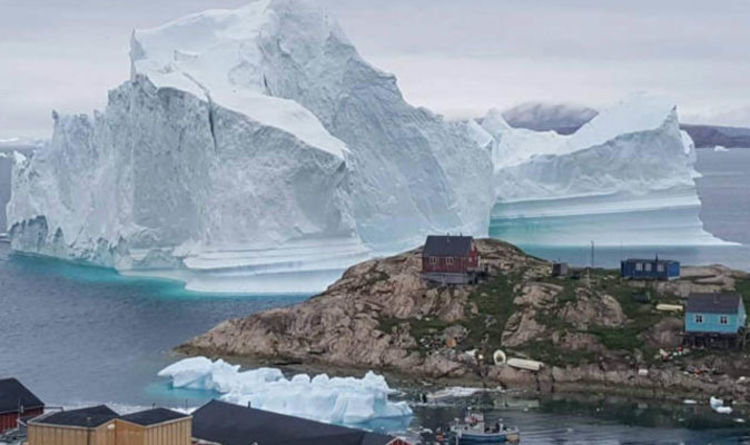 
Residents of the coastal village of Innaarsuit were evacuated on Friday morning, according to Greenland police spokeswoman Lina Davidson.

She said: “Its residents were evacuated in the early hours of Friday in fears that a flood would hit the place as a result of the broken iceberg.

“All the people in the danger area have been evacuated to a building that is further up in the village. The evacuation happened only because the iceberg is so close to the village.

“We fear the iceberg could calve and send a flood towards the village.’

Calving is when the ice breaks into the sea and you can see the sea level rise slightly as the process occurs.

Even though it is normal behaviour, researchers say it is becoming more common and will contribute to rising sea levels.

Even though the iceberg is currently grounded and has not moved, heavy rains are predicted until Saturday and could increase the chances of the iceberg breaking.

Karl Petersen, a chair of the local council in Innaarsuit, told CBS: “There are 180 inhabitants and we are very concerned and are afraid.”

Susanna Eliasson, another member the village council, told KNR: “We can feel the concern among the residents. We are used to big icebergs, but we haven’t seen such a big one before.”

Scientists are watching another iceberg that is the size of Manhattan that broke off on June 22 from the Helheim Glacier in eastern Greenland.

An expert on atmospheric and ocean science David Holland and his team witnessed the monumental event.

The New York University professor said told the Associated Press that “this is the largest event we’ve seen in over a decade in Greenland.”

The entire process took 30 minutes but was condensed to two and was filmed by Mr Holland’s wife, Denise of NYU’s Environmental Fluid Dynamics Laboratory.

Mrs Holland said: “It’s hard to describe. It’s like a jet engine, lots and lots of big booms, and it ricochets all over the calving.

“I turned on my camera, and I was lucky to catch what we saw.”

“Global sea-level rise is both undeniable and consequential.

“By capturing how it unfolds, we can see, first-hand, its breath-taking significance.”

Early Puberty in Girls Surged in The Pandemic, And We May Finally Know Why : ScienceAlert
The Tonga Eruption’s 50 Million Tons of Water Vapor May Warm Earth For Months to Come : ScienceAlert
How Many Ants Live on Earth? Scientists Came Up With an Answer : ScienceAlert
The Orbit of a Sun-Like Star Reveals The Nearest Black Hole Ever Found : ScienceAlert
A Robot on Mars Detected The Tremors of Meteorites Hitting The Red Planet : ScienceAlert