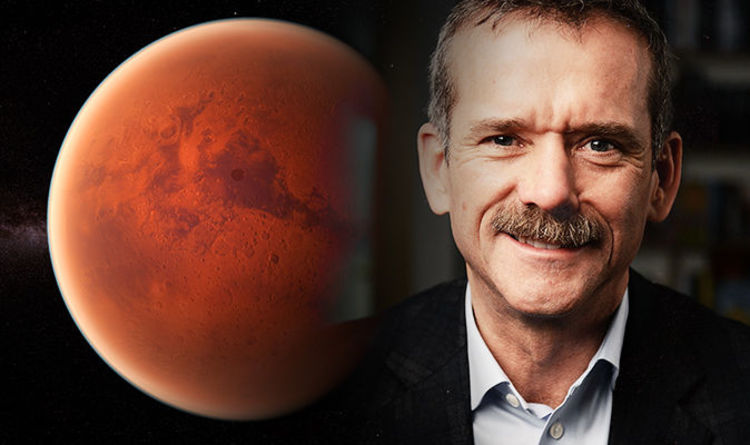 
Retired International Space Station Commander Chris Hadfield shocked the world saying the same technology that took the man to the Moon could have sent people to Mars.

He said: “We could send people to Mars decades ago.

“The technology that took us to the Moon and back when I was just a kid — that technology can take us to Mars.”

But no astronaut would have survived the journey, he said.

In fact, he believes the 140 million miles separating the Red Planet from Earth would be fatal to anyone brave enough to attempt the journey, despite the fact that the space rockets would likely succeed to take them there.

Mr Hadfield said: “The majority of the astronauts that we send on those missions wouldn’t make it. They’d die.”

Mars is 660 times further than the Moon, meaning a return journey there would last between 500 days to three years.

The dangers faced by astronauts on their trips to the Moon, starvation, the risk of explosion and the exposure to radiations, would be increased immensely by the length of this incredible journey.

And the fact that even new space programmes like SpaceX still rely on chemical propellent to leave Earth increases the dangers.

The greater the distance to the destination, the more space is needed for fuel reserves, sacrificing space for food.

There are a number of systems that could mitigate the effects of radiations and risks of starvation, such as a different type of fuel, lightweight shielding, hibernation capsules, and bioregenerative life-support systems, but none of the players involved in the new space race have come up with similar solutions yet, Mr Hadfield said.

But despite his experience with groundbreaking technology, he can still be marvelled by its advancement.

He said: ”Spaceflight was impossible when I was born.

“And I’m still alive. It’s not very long ago.

“Someone has to invent something we haven’t thought of yet.

“It sounds outlandish, but we figured out how to harness electricity and what electrons do, and that seemed crazy, and it’s revolutionised life and travel.

NASA believes the first trip to the red planet could be just a decade away.

Following US President Donald Trump’s approval of Space Policy Directive 1 in December 2017, the American space agency said it has plans to send a man to Mars in the 2030s.

The Space Policy Directive 1 represented a jump ahead in the colonisation of space, as it called for expanded human exploration of the solar system.

Following the signature, NASA called the decision a “change in national space policy”, providing Washington with a US-led integrated programme “with private sector partners for a human return to the Moon, followed by missions to Mars and beyond”.

Shimmering ‘Lakes’ Under The South Pole of Mars Might Be Something Else Entirely : ScienceAlert
Amazing New Fossils Provide Earliest Known Traces of The Evolution of Our Jaws And Limbs : ScienceAlert
Behold, The Epic Last Images Taken by NASA’s Asteroid Redirection Test Spacecraft : ScienceAlert
The Tonga Eruption’s 50 Million Tons of Water Vapor May Warm Earth For Months to Come : ScienceAlert
Still Short of Breath? Here Are 3 Ways COVID-19 Can Damage Lungs Long Term : ScienceAlert