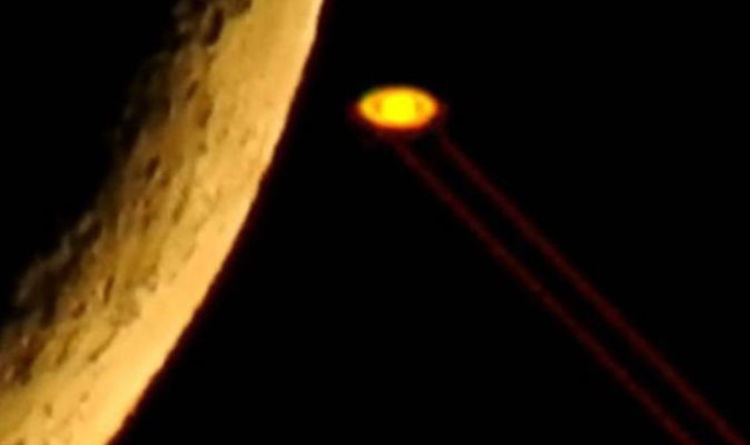 
An amateur astronomer was gazing at the stars through her telescope when she noticed something bizarre.

Just past her sighting of the moon, Paula Gilley could see Saturn.

However, what makes the sighting so strange is that she could see what appeared to be red lasers being shot out deep into space.

The two beams of light seemed to be originating from the giant rings of Saturn, one each side of the planet itself.

A video of the strange anomaly was captured on September 11, and Ms Gilley uploaded it to her YouTube page.

In the video Ms Gilley says: “I bumped up contrast and saturation; I have seen many forms of pixels even square one but never have seen laser beam pixels?

Many people agreed with Ms Gilley, coming up with their own theories about what the lights could be.

One person asked if the beams were a “message home”.

Others pointed out that the lights may not be coming from Saturn, but rather are being pointed at the massive planet instead.

However, some were unconvinced by the sighting, believing that it is just rendering issues.

A user by the name of MaceMan commented beneath the YouTube video: “The short answer is that it is probably compression artifacting.

“As you said before, it wasn’t the ‘original’, and by copying the file over (as well as compression in your video editing software) this effect shows up.”

Some people are convinced that Saturn is a hotspot for alien activity.

One of NASA’s former top engineers previously claimed that there are alien spaceships hiding in Saturn’s rings.

The claim was made by Dr Norman Bergrun, a well respected engineer who held a position at NASA’s Ames Research Centre.

Dr Bergrun said that “living alien UFO spaceships” are using the rings of Saturn as a hiding spot and that they are “proliferating” at am alarming rate.

The former NASA employee has previously said that the amount of spaceships has reached “critical” levels, and that authorities should keep an eye on it.

He added that the rings have become so compact with UFOs that they are now starting to gather around the likes of Jupiter and Neptune.