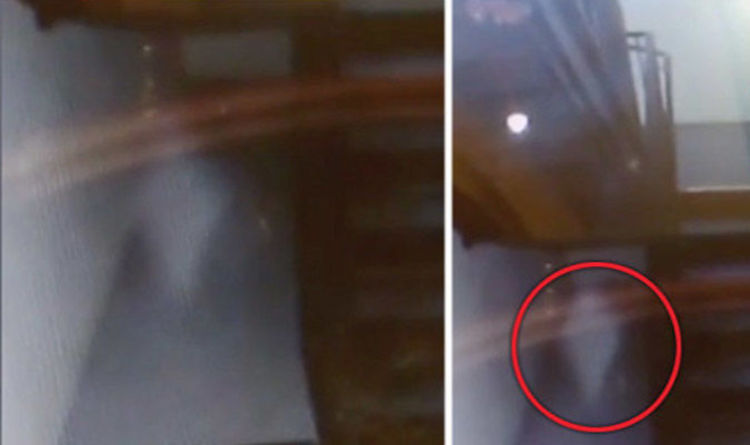 
According to the video shared on paranormal channel The Hidden Underbelly 2.0, a man decided to record the activity after spotting it on a surveillance camera at work.

He then uploaded the creepy encounter to his YouTube page entitled: “Ghost boy under the stairs.”

Paranormal enthusiasts who viewed the video were impressed, Dailystar.co.uk reports.

One posted on YouTube: “Very compelling! Kind of hard to write it off as a bug or something in just how it moved!”

And another added: “Just goes to show that even though we don’t understand how or why, we are not alone!

“And once again, someway and somehow, the after life is here among us.”

However, sceptics were less convinced with claims it was just a video glitch or even a hoax altogether.

One posted: “The fact that something we cannot immediately explain in a video does not mean it is proof of ghosts… that is a huge leap.”

It is said to have been filmed at 2am on March 17 in an undisclosed location.

There have been a host of alleged ghost videos caught released on YouTube in recent weeks and, including a phone being flung off its cradle in Britain’s most haunted pub.

Other people have also found supposed apparitions in Google Maps images across the globe.

One Simple Idea Makes It Much Easier to Manage Your Weight Over Time : ScienceAlert
Hypertension Drug Shown to Extend Lifespan And Slow Aging in Animals : ScienceAlert
This Physicist Says Electrons Spin in Quantum Physics After All. Here’s Why : ScienceAlert
Sword Mistaken For Replica Is Actually An Ancient 3,000-Year-Old Weapon : ScienceAlert
Major Blow as Experimental HIV Vaccine Fails in Late Clinical Trial : ScienceAlert