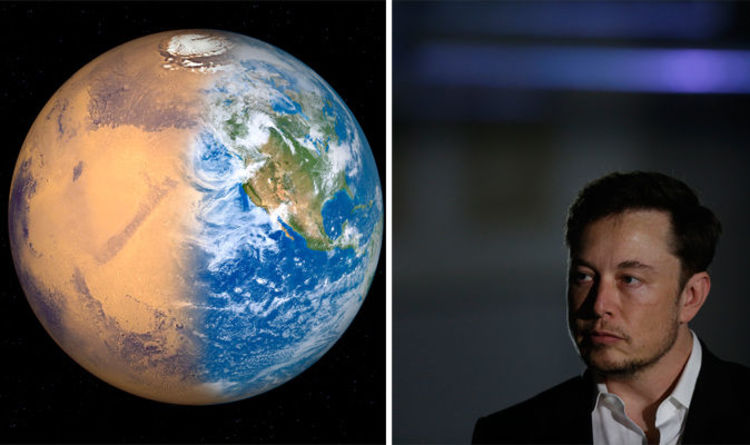 
The process of humankind living on Mars followed the release the carbon dioxide trapped within the planet to thicken the atmosphere, keeping the it warm enough to sustain liquid water, in exactly the same way greenhouse gasses build up on Earth.

However, when NASA announced it would not be possible to do this with “currently available technology”, the news essentially shattered billionaire Elon Musk’s dreams, as he was one of the leading contenders to put people on the Red Planet.

The SpaceX founder has dismissed the study and still has his crossfire set on Mars.

When it was suggested to Mr Musk on Twitter that it is not possible to terraform Mars, the South African-born entrepreneur hit back: “There’s a massive amount of CO2 on Mars adsorbed into soil that’d be released upon heating.

“With enough energy via artificial or natural (sun) fusion, you can terraform almost any large, rocky body.”

One of the ways which Mr Musk has suggested Mars could be terraformed was to drop thermonuclear bombs at the planet’s poles – where most of the planet’s CO2 is.

But NASA dismissed this possibility in its study: “The most accessible source is CO2 in the polar ice caps; it could be vaporised by spreading dust on it to absorb more solar radiation or by using explosives.

“However, vaporising the ice caps would only contribute enough CO2 to double the Martian pressure to 1.2 percent of Earth’s.”

The new research has found that by using the current technology we have available today, it would not be possible to completely change the CO2 levels of the planet.

Mars’ current atmospheric pressure is just 0.6 percent that of Earth’s, and as it is farther away from the Sun than we are it would take a lot to bring it up to our levels and keep it at a relatively warm planet which could support life and water.

Bruce Jakosky of the University of Colorado, Boulder, lead author of the study appearing in Nature Astronomy, said: “Carbon dioxide (CO2) and water vapor (H2O) are the only greenhouse gases that are likely to be present on Mars in sufficient abundance to provide any significant greenhouse warming.

“Our results suggest that there is not enough CO2 remaining on Mars to provide significant greenhouse warming were the gas to be put into the atmosphere; in addition, most of the CO2 gas is not accessible and could not be readily mobilised.

“As a result, terraforming Mars is not possible using present-day technology.”

Ancient Burial of a Young Girl Shows How We Carried Our Babies 10,000 Years Ago : ScienceAlert
We May Finally Know Why Oceans in The Southern Hemisphere Are Getting So Warm : ScienceAlert
Experts Estimate The Scale of The Nord Stream Pipelines Methane Leak : ScienceAlert
Control of a 6-Qubit Processor in Silicon : ScienceAlert
Weight Lifting in Old Age Does More Than Just Keep Your Muscles Strong : ScienceAlert