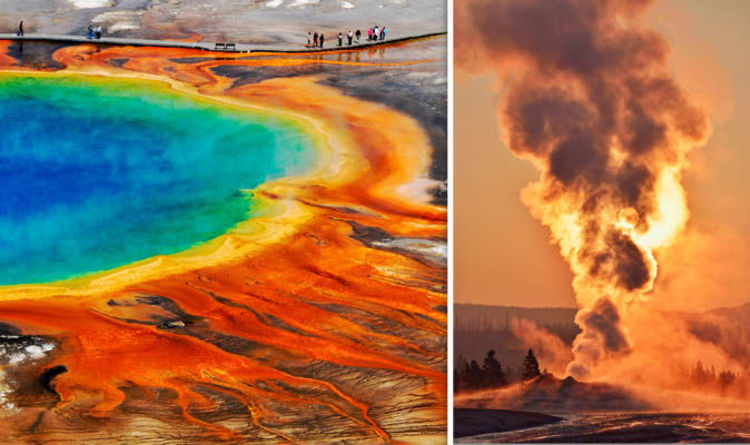 
Geologists at the Virginia Polytechnic Institute and State University (Virginia Tech) may have discovered an untaped source of the supervolcano’s destructive power.

Until recently, scientists believed Yellowstone draws energy directly from the Earth’s core in the same way most active volcanoes do.

But X-ray scans of the Yellowstone volcano chain reveal an ancient ocean plate could be the real culprit behind Yellowstone’s power.

The volcano expert claimed to have found no evidence of volcanic heat rising upwards from the Earth’s core and into the volcano.

Instead, she suggested the system was created 30 million years ago when an ancient plate was driven like a wedge beneath what is today the Western US.

She said: “This ancient oceanic plate broke into pieces, resulting in perturbations of unusual rocks in the mantle which led to volcanic eruptions in the past 16 million years.”

These past Yellowstone eruptions would have been extremely violent and explosive.

The oceanic plate in question was dubbed the Farallon plate and as parts of it tore off during subduction, they sunk into deep earth.

Professor Zhou said: “The process started at the Oregon-Idaho border about 16 million years ago and propagated northwestward, forming a line of volcanoes that are progressively younger as they stretched northwest to present-day Wyoming.”

The volcano expert and her fellow Virginia Tech researchers came to the startling conclusion after using X-ray like scans to dig deep into the volcano.

With the aid of the so-called USArray, a network of seismographs spread across the USA, the geologists found an unusual structure between 250 and 400 miles beneath the chain of Yellowstone volcanoes.

Professor Zhou said the findings are a “direct contradiction” of the widely accepted plume model.

If the plume model was correct, the expert argued the moving North American plate would have displaced some of the older volcanoes sitting over the fixed plume near the Oregon-Idaho border.

She said scientists up until now have been unsuccessful in determining why the Yellowstone volcanoes are located where they are.

But the geologists appeared hopeful further, more detailed X-ray studies of the Yellowstone supervolcano will yield more information on the oceanic plate which has driven the volcano’s eruptions.

Professor Zhou said: “This is the first time the new imaging theory has been applied to this type of seismic data, which allowed us to see anomalous structures in the Earth’s mantle that would otherwise not be resolvable using traditional methods.

“The next step will be to increase the resolution of the X-ray-like images of the underground rock.

“More detailed images of the unusual rocks in the deep earth will allow us to use computer simulation to recreate the fragmentation of the gigantic oceanic plate and test different scenarios of how rock melting and magma feeding system work for the Yellowstone volcanoes.”

The Yellowstone supervolcano last erupted some 630,000 years ago and there is no concrete way of predicting when another cataclysmic eruption might happen.

At the moment, Professor Zhou said the novel X-ray technology is not the answer to forecasting future Yellowstone eruptions but rather studying past ones.

Narwhals Are So Weird, Scientists Used Chaos Theory to Explain Their Behavior : ScienceAlert
Shimmering ‘Lakes’ Under The South Pole of Mars Might Be Something Else Entirely : ScienceAlert
Experts Estimate The Scale of The Nord Stream Pipelines Methane Leak : ScienceAlert
Hubble And Webb Pics Reveal DART Impact Was Even Bigger Than Expected : ScienceAlert
Weight Lifting in Old Age Does More Than Just Keep Your Muscles Strong : ScienceAlert