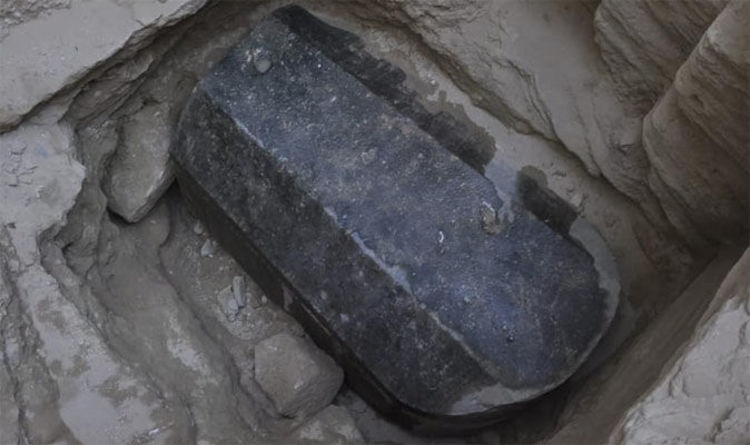 The ancient mummy dates back to the Ptolemaic period between 305BC and 30BC.

A carved alabaster head was also discovered at the site which is likely to belong to whomever is inside the tomb.

Experts have been unsure who the alabaster or tomb belonged to, as the discoverers of it, the Egyptian Ministry of Antiquities, are taking their time in opening it because of how precious it is.

Theories had been rattling around that it belonged to Alexander the Great, whose burial place has never been found and the person in which Alexandria is named after.

However, other archaeologists believe it is unlikely it belonged to the Ancient Greek conquerer.

The secretary general of the government’s Supreme Council of Antiquities, Mostafa Waziri, told the New York Times: “I’ve had calls about this all day.

“People are saying it might contain Alexander or Cleopatra or Ramses. They don’t know what they are talking about.”

Two experts, who remained unnamed while speaking to National Geographic as they work for the Egyptian Ministry of Antiquities, believe it is likely the sarcophagus was some sort of Roman burial – who had presence in northern Africa at the time.

A report in National Geographic reads: “One of the two archaeologists believes that, since Alexandria wasn’t even founded until the fourth century BC, the massive sarcophagus may have been brought to the city empty, from an earlier, dynastic-period site down the Nile—such as Memphis—and then re-used to bury someone in later years.

“The other archaeologist believes that the burial itself may also actually date to the Roman period, which follows the Ptolemaic period, based on its “high” elevation (the sarcophagus was uncovered just 15 feet below the modern street surface).”