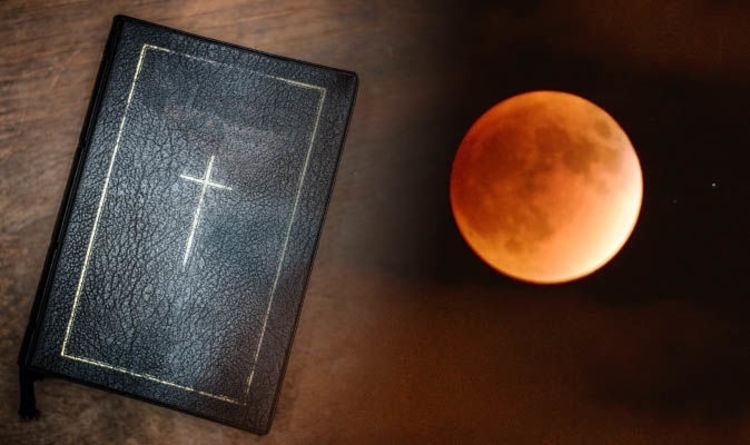 
The Blood Moon will appear on the evening of Friday, July 27, after the full moon enters the Earth’s shadow.

Prominent Christian preachers waiting for the arrival of the Biblical apocalypse believe the Blood Moon is a sign of impending doom.

Chief among the doomsday enthusiasts is American pastor Paul Begley who claims the Blood Moon was prophesied by at least three scriptures in the Bible.

Preaching to an online audience on Tuesday, July 18, pastor Begley labelled the night of the Blood Moon a “prophetic day”.

He said: “July 27 is not the end of the world but it certainly is a prophetic day.

“It will certainly be a prophetic night as the longest Blood Moon of the century will be over Jerusalem in the 70th year of Israel as a nation, in the very year Jerusalem became the capital of Israel and eternal city of God in Psalms Chapter 48.”

According to Mr Begley, the Blood Moon eclipse was foretold on three separate occasions in the Book of Joel, the Book of Acts 2 and the Book of Revelation Chapter 6.

But do these Christian scriptures ever mention the arrival of the Blood Moon?

There is no specific use of the phrase Blood Moon in the Bible but there is reference to the moon turning red or dark before the end of the world.

The King James version of the Bible, Book of Joel Chapter 2, reads: “The earth shall quake before them; the heavens shall tumble: the sun and the moon shall be dark, and the stars shall withdraw their shining:

“ And the Lord shall utter his voice before his army: for his camp is very great: for he is strong that executeth his word: for the day of the Lord is great and very terrible; and who can abide it?”

The Book of Acts Chapter 2 reads: “The sun shall be turned into darkness, and the moon into blood, before the great and notable day of the Lord come:

“And it shall come to pass, that whosever shall call on the name of the Lord shall be saved.”

And the Book of Revelation reads: “And I beheld when he had opened the sixth seal, and lo, there was a great earthquake; and the sun became black as sackcloth of hair, and the moon became as blood;

“And the stars of heaven fell unto the earth, even as a fig tree casteth her untimely figs, when she is shaken of a mighty wind.”

There is however little to suggest there is anything particularly significant about the July Blood Moon other than it being the longest one of the 21st century.

This century alone there have been 16 total lunar eclipses in the run up to pastor Begley’s latest sermon and the end of the world remains to be seen.

According to Craig Keener, a New Testament professor at Asbury Theological Seminary, trying to prophesy the end of the world goes against the teachings of the scripture.

He told Huffington Post: “Personally, as a Christian, I’m glad that some people are eager for Jesus’s return.

“But Christians should nurture that expectation without needing to look to Blood Moons and the like.”

Weight Lifting in Old Age Does More Than Just Keep Your Muscles Strong : ScienceAlert
Control of a 6-Qubit Processor in Silicon : ScienceAlert
Ancient Burial of a Young Girl Shows How We Carried Our Babies 10,000 Years Ago : ScienceAlert
Hubble And Webb Pics Reveal DART Impact Was Even Bigger Than Expected : ScienceAlert
Long COVID Is Still Raising More Questions Than Answers, Say Researchers : ScienceAlert