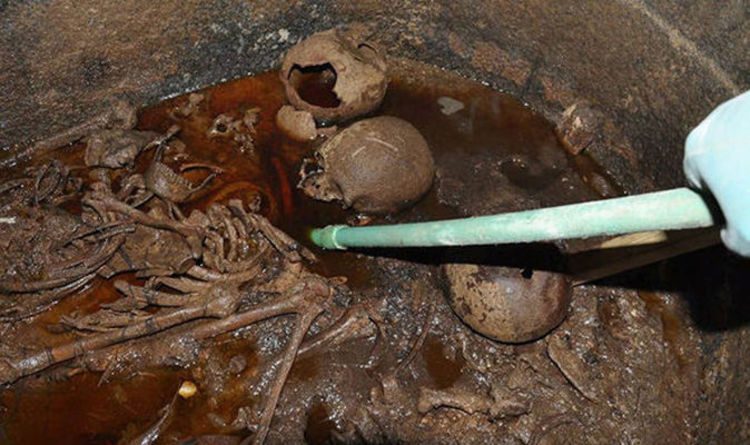 The ancient mummy dates back to the Ptolemaic period between 305BC and 30BC.

Now, in a gruesome turn of events, people are demanding they are allowed to drink the ‘juice’ found inside the coffin in order to gain any potential powers which may be in there.

A user known as Innes Mck began the petition, and in just three days it has received almost 18,000 signatures.

The note, written to ‘The King of Skeletons, Egypt’, reads: “We need to drink the red liquid from the cursed dark sarcophagus in the form of some sort of carbonated energy drink so we can assume its powers and finally die.”

The petition is obviously intended to be tongue in cheek, some are demanding the juice for the sake of freedom.

User Cyndie Carr posted: “There is no freedom unless there is freedom to drink the bone juice.”

Experts have strongly warned against drinking the water, stating it is mostly sewage to which Innes Mck jokingly responded: “Please stop trying to tell me the skeleton juice is mostly sewage, that’s impossible, everyone knows skeletons cannot poop.”

Others believe that the tomb may be cursed and strongly advised against opening it in case plagues are released unto the world.

However, this was debunked when the sarcophagus was prised open for the first time in 2000 years by Secretary-General of Egypt’s Supreme Council of Antiquities Mostafa Waziri.

He said at the unveiling: “We’ve opened it and, thank God, the world has not fallen into darkness.

“I was the first to put my whole head inside the sarcophagus and here I stand before you. I am fine.”

The Tonga Eruption’s 50 Million Tons of Water Vapor May Warm Earth For Months to Come : ScienceAlert
Watch a Tiny Robot Blob Transform Into Even Tinier Bits to Squeeze Through Cracks : ScienceAlert
One of The World’s Largest Organisms Is Disintegrating. Here’s How We Might Save It. : ScienceAlert
Wolves Really Can Become Attached to Humans Like Dogs Can, Adorable Study Finds : ScienceAlert
A Weird Blob of Hot Gas Is Whizzing Around Sagittarius A* With ‘Mind-Blowing Velocity’ : ScienceAlert