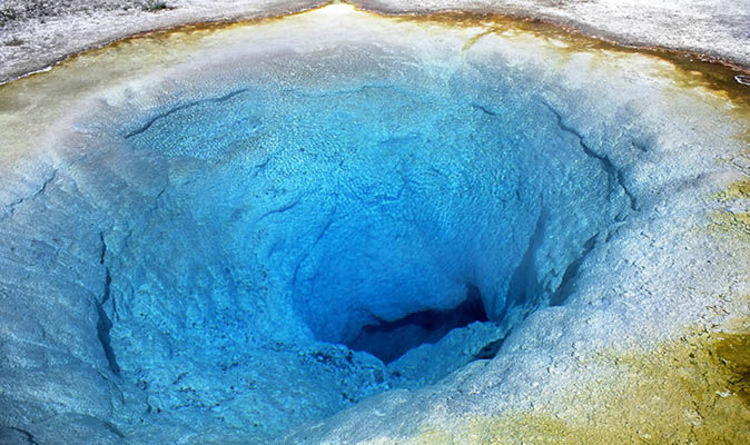 
USGS scientists have discovered that, 20,000 years ago, Yellowstone did not look anything like you would expect.

The Yellowstone Caldera and its surround would not have been bubbling with lava and erupting geysers.

Instead, Yellowstone would have been covered in an ice sheet thousands of feet thick.

USGS scientist Ken Pierce and his team dedicated their careers to studying how glaciers advanced and retreated around Yellowstone during the Pleistocene, often referred to as the Ice Age.

The team used radiocarbon dating and a method called “surface exposure dating” to develop a detailed chronology of glacier advance and retreat in Yellowstone.

During that time, nearly all of Yellowstone was covered by an ice cap up to 4,000 feet thick (about 1,200 meters).

About 14,000 years ago, Yellowstone was once again ice-free, and the fluid pressure in the hydrothermal system which had built under the weight of the ice began causing groundwater to boil.

Yellowstone volcano has seen three major eruptions that scientists and historians know of.

The USGS reports that large volumes of lava flow erupted in the caldera between 180,000 and 70,000 years ago, and no magmatic eruptions have occurred since.

However there have been hydrothermal explosions, such as that seen when the ice melted.

Yellowstone is the site of one of the world’s largest hydrothermal systems including Earth’s largest concentration of geysers.

The USGS says the odds of Yellowstone erupting are 0.00014 percent.

However, if it did erupt, it would likely change the face of the planet as we know it.

Sulphur aerosols that reflect sunlight back into the atmosphere cool the climate would be emitted, cooling the globe.

The states of Wyoming Idaho, Colorado, Montana and Utah would likely be totally wiped out, and much of the US buried in ash.

It Turns Out There Is Such a Thing as Good Gossip, According to New Research : ScienceAlert
Weight Lifting in Old Age Does More Than Just Keep Your Muscles Strong : ScienceAlert
‘Dark Data’ Is Leaving a Huge Carbon Footprint, And We Have to Do Something About It : ScienceAlert
We Just Got Our Closest View of Europa in 20 Years, And We Can’t Stop Staring : ScienceAlert
Experts Estimate The Scale of The Nord Stream Pipelines Methane Leak : ScienceAlert