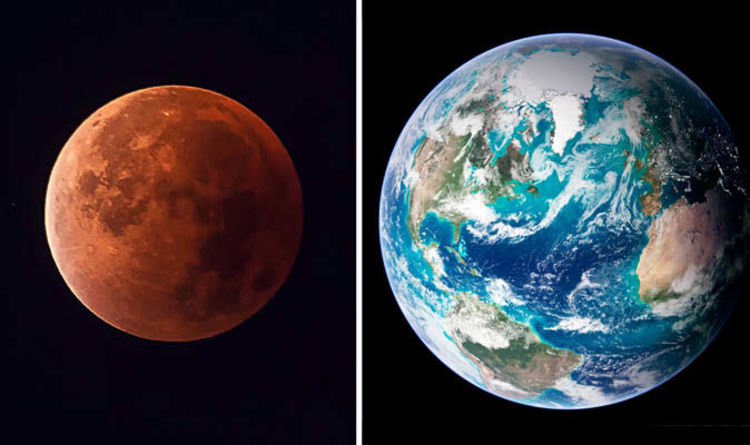 
The lunar phenomenon will grace the night skies this Friday, July 27, in the evening hours.

During the eclipse, the July full moon will pass through the centre of the Earth’s shadow – making it glow with a deep red colour.

In certain parts of the world, the Blood Moon eclipse will be visible for one hour and 43 minutes, making it the longest eclipse of the 21st century.

The eclipse will be the most visible in Central parts of Asia and Eastern Africa – but does that include the USA, India, the UK and Australia?

When will the eclipse be viewable in the USA?

The Blood Moon’s path of totality excludes the USA, Canada and Mexico.

Stargazers in those countries will instead have to rely on online broadcasts of the Blood Moon.

One option is to watch the official Time and Date live stream hosted from a mobile observatory on the Greek island of Santorini.

The broadcast will feature live commentary from astronomers at Perth Observatory, Australia, and the Astronomical Society of Southern Africa.

Alternatively, Royal Observatory Greenwich in London, UK, will host its own expert-laden eclipse broadcast on its Facebook page on Friday evening.

When will the eclipse be viewable in India?

India will be positioned in the prime location to see the eclipse from start finish on the night of July 27 and July 28.

The penumbral stage of the eclipse will start to darken the moon around 10.44pm local time (IST).

The Blood Moon will reach full eclipse on Saturday morning, around 1am IST and end at 2.43am IST.

Find out more on how to see the Blood Moon eclipse in India right here.

When will the eclipse be viewable in the UK?

Although the UK sits outside of the optimal zone, the moon will still rise eclipsed over the horizon.

Moonrise times across the UK will vary from north to south, with the earliest around 8.50pm BST in the south and after 9.26pm up in Scotland.

The total eclipse phase of the Blood Moon will begin below the horizon at 8.30pm BST.

Once the clock strikes midnight, the moon will be returning to normal and the penumbral eclipsing will end by around 12.30am BST.

When will the eclipse be viewable in Australia?

Much like the UK, Australia sits outside the optimal zone but will still catch a glimpse or two of the red moon.

Stargazers can look forward to seeing the moon in the wee morning hours on Saturday, July 28.

In Sydney and Melbourne, the first stages of the eclipse will kick off at 3.14am local time (AEST).

The total eclipse is then expected to start at 5.30am AEST.

However on the other side of the country in Perth total eclipse looks to start at 3.30am AWST.

The Frogs Vanished, Then People Got Sick. This Was No Harmless Coincidence. : ScienceAlert
A Robot on Mars Detected The Tremors of Meteorites Hitting The Red Planet : ScienceAlert
Early Puberty in Girls Surged in The Pandemic, And We May Finally Know Why : ScienceAlert
The Tonga Eruption’s 50 Million Tons of Water Vapor May Warm Earth For Months to Come : ScienceAlert
The Remains of This Recently Found Ancient Structure Are Even Older Than The Pyramids : ScienceAlert