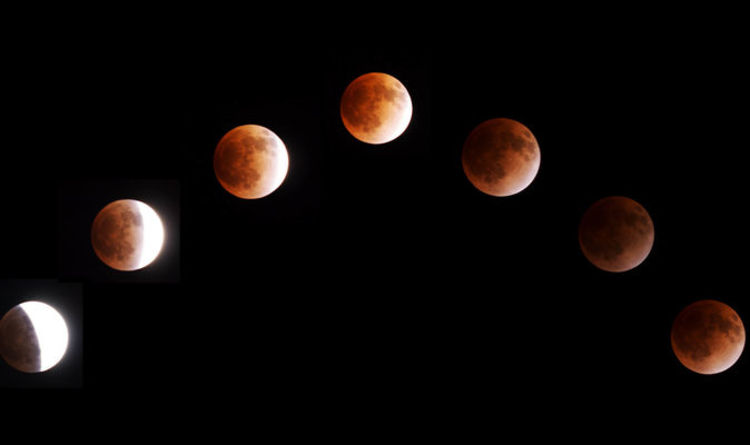 
A lunar eclipse is now on its way to many countries around the world, and millions of people will be in with a chance of watching the spectacle.

Those living near the Pacific Ocean were party to the rare first sightings, but the UK and rest of the world was left out.

But this month people in the UK and other select countries will be lucky to catch a glimpse of the celestial treat with the Blood Moon due tonight.

Heatwave conditions around the UK have meant that the country has recently been enjoying crystal clear skies and baking hot sun.

However, recent warnings from the Met Office have heavy rain and thunder scheduled for the rest of Friday and the weekend.

This means that much of the country could have difficulty watching the Moon as it progresses through eclipse.

However, there are other ways to see the eclipse if your area is under the influence of grey skies.

How to watch the Blood Moon

The latest Blood Moon is set to be the longest lunar eclipse this century, as our Moon is painted a glorious red for a total one hour and 43 minutes.

The UK will see this phenomenon from 9pm to 10.15pm today, and those areas in the grips of bad weather will be able to see the whole thing unfold online.

The Virtual Telescope Project – famous for its stream of Elon Musk’s car in space – will hold its own stream of the event from the Roman Forum on Palatine Hill.

Kicking off at 2.30pm EDT (7.30pm BST), the project hopes to wow viewers with beautiful skies and surroundings.

What are the stages of a lunar eclipse?

The spectacular sightings of a Blood Moon come in stages, with the total eclipse being the much anticipated peak stage.

The event kicks off with the penumbral eclipse, when the outside of the Earth’s shadow is visible as it starts tracking across the Moon.

After this, the partial eclipse takes place, when the inner part of the Earth’s shadow starts to creep in.

Total eclipse comes in when the Earth is standing fully between the Moon and Sun, projecting the eery red glow onto the Moon’s surface.

Following total eclipse is maximum eclipse, which is the mid-point of total eclipse, halfway through the one hour and 43 minutes for Blood Moon.

After the Earth has fully eclipsed the Moon, the eclipse ends and the cycle progresses again through partial and penumbral eclipse until the earth has fully moved out of the Sun’s shadow.

A Blood Moon like today’s will not be visible again for another 100 years, so tune in if you can.

A New FRB Signal Has Buzzed Nearly 2,000 Times in Just Two Months, Raising a Mystery : ScienceAlert
This Is How Much Fossil Fuel The World Is Sitting on, And It’s a Time Bomb : ScienceAlert
The Real Reason For Using Flight Mode Is Not What You Think : ScienceAlert
Why House Fly Barf Is an Overlooked Potential Vector of Disease : ScienceAlert
Scientists Are About to Fire Up The Most Powerful Laser in The US : ScienceAlert